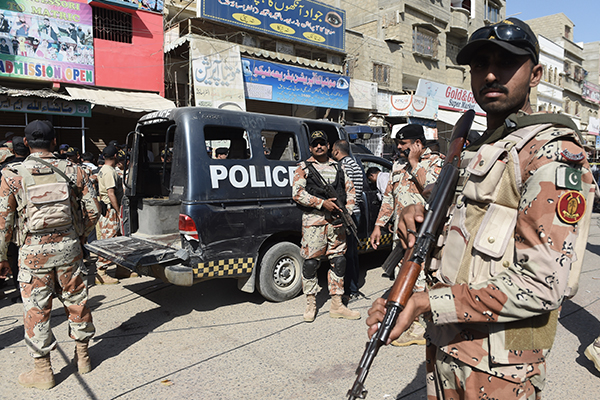 The Rangers, and Army, can’t carry on as if nothing has happened.

Let’s begin with the knowns.

Aftab Ahmed was the coordinator for Dr. Farooq Sattar, deputy convener and parliamentary leader of the Muttahida Qaumi Movement party. The Rangers (Sindh) arrested him on Sunday, and presented him in an antiterrorism court on Monday along with seven other suspects. The men were accused of target-killing over 40 people. The court granted the Rangers 90-day custody of the men under the 1997 antiterrorism act.

On Tuesday morning, according to the Rangers, Ahmed complained of chest pain. He was brought to Jinnah Hospital, where, by 7:25 a.m., after emergency preservation and resuscitation efforts, he was pronounced dead. The MQM alleged Ahmed was tortured. Photos of his body, which do not reveal his face, appeared on social media and show torture marks and bruises. Ahmed was buried Tuesday at the MQM’s ‘martyrs’ graveyard.’ He leaves behind a widow and five children.

The Rangers say Ahmed died of cardiac arrest. An autopsy was done on him and its report reserved. The Army chief, Gen. Raheel Sharif, has ordered an inquiry into the circumstances of the death.

The incident raises many questions but let’s first list some other knowns.

There is an international Convention against Torture and Other Cruel, Inhuman or Degrading Treatment or Punishment, which was adopted and opened for signature, ratification and accession by U.N. General Assembly Resolution no. 39/46 of Dec. 10, 1984. It entered into force on June 26, 1987. Pakistan is a signatory to the convention, having signed it on April 17, 2008, and ratified it on June 3, 2010. The convention is in line with the Universal Declaration of Human Rights in the U.N. Charter and the International Covenants on Human Rights.

Article 1 of the Convention reads: “1. For the purposes of this Convention, the term ‘torture’ means any act by which severe pain or suffering, whether physical or mental, is intentionally inflicted on a person for such purposes as obtaining from him or a third person information or a confession, punishing him for an act he or a third person has committed or is suspected of having committed, or intimidating or coercing him or a third person, or for any reason based on discrimination of any kind, when such pain or suffering is inflicted by or at the instigation of or with the consent or acquiescence of a public official or other person acting in an official capacity. It does not include pain or suffering arising only from, inherent in or incidental to lawful sanctions. 2. This article is without prejudice to any international instrument or national legislation which does or may contain provisions of wider application.”

The convention, as legally worded, allows for no exceptions to what it states in the opening article.

Articles 2 reads: “1. Each State Party shall take effective legislative, administrative, judicial or other measures to prevent acts of torture in any territory under its jurisdiction. 2. No exceptional circumstances whatsoever, whether a state of war or a threat of war, internal political instability or any other public emergency, may be invoked as a justification of torture. 3. An order from a superior officer or a public authority may not be invoked as a justification of torture.” And Article 3 reads that: “1. No State Party shall expel, return (‘refouler’) or extradite a person to another State where there are substantial grounds for believing that he would be in danger of being subjected to torture. 2. For the purpose of determining whether there are such grounds, the competent authorities shall take into account all relevant considerations including, where applicable, the existence in the State concerned of a consistent pattern of gross, flagrant or mass violations of human rights.” (Emphasis added.)

The Constitution of Pakistan, on the other hand, qualifies its provisions on Fundamental Rights. While Article 10A gives the right to fair trial (“For the determination of his civil rights and obligations or in any criminal charge against him, a person shall be entitled to a fair trial and due process”), Article 14 talks about the inviolability of the dignity of man (Clause 2 says “No person shall be subjected to torture for the purpose of extracting evidence”), and Articles 9 and 10 speak of the security of person and safeguards as to arrest and detention, respectively; exceptions are provided both in Article 8 (laws inconsistent with or in derogation of fundamental rights to be void) and Article 10 (Clause 3, etc.).

One does not have to be a jurist to see that the provisos and exceptions in the Constitution contravene the U.N. convention against torture, which does not accept any exceptions and to which Pakistan is a signatory and ratifier.

Of course, this is about the law.

There’s another domain, that of force or politics, including geopolitics. Countries flout international law provisions. The area where law and politics intersect has always been gray. The U.S., whose Department of State keeps putting out reports on human-rights abuses and religious intolerance, etc., has consistently used ‘enhanced methods of interrogation’ and ‘rendition’ since 9/11 and used foreign territories to do so to remain, technically, in compliance with U.S. domestic law. Television programs, like 24, show counterterrorism ‘heroes’ using torture on a few bad guys to safeguard the millions of good ones. Col. Nathan Jessup’s outburst in A Few Good Men to justify ‘Code Red’ gives an insight into the twisted logic used by the sentinels on the wall to justify inhumanity.

None of this adds up to security. And I speak as a student of strategy and counterterrorism, not as a mushy, soft-hearted liberal.

Take this case and its absurdities. People will jump in and say that the MQM too tortures. Yes, it does—or did. Chopped-up bodies in gunny bags, target killings, extortion and much else can be blamed on the MQM. But all of this can also be blamed on others. In any event, the state cannot do what nonstate actors do, especially if it claims to take on and take down the nonstate actors precisely for doing what the nonstate actors do and which flouts legal-constitutional norms by which we must live.

If Ahmed was indeed involved in target-killings, the Rangers were supposed to produce evidence—physical and material evidence, not confessional evidence. Nowhere in the civilized world does confessional evidence impress a court. One of the reasons we cannot prosecute people—even wrongdoers—is because we do not know how to investigate and use forensic evidence. Result: pick up a person, torture him, and get a statement that falls to pieces when the case goes to court. Or, to establish special courts that rely less on evidence or how it is gathered and are concerned more about how many people they can hang, evidence be damned.

The Rangers cannot simply absolve themselves. The investigation into this incident must determine if there is any spoken or unspoken policy to torture suspects picked up and detained by their teams. Even if it can be proved that there’s no such policy from the top, then, too, the Rangers (Sindh) must be held responsible for weak command and poor discipline. And since this involved the killing of a person, the Rangers, and Army, cannot simply carry on as if nothing has happened. As it is, the ‘enthusiasm’ of the Rangers has nearly undone even the good work they might have done to put Karachi back on the rails, though that statement itself can be, and has been, challenged.

Meanwhile, just in case no one has noticed, the inquiry into Ahmed’s death has been ordered by the Army chief. Why? The Rangers, while officered by Army personnel, is a paramilitary force under the command of the Interior Ministry. That’s the de jure position. The de facto position is clear from the Army chief’s order. It’s time to remove this fig leaf that is meant to safeguard the modesty of civilians. Let the naked, unvarnished truth be out.

Why Rangers n Establishment only Victimized Muhajir MQM workers ? N other side over all on Pakistan TTP n other band outlet party openly working ?
My father and grand father sacrifice all live then Pakistan is independent country and Establishment victimized my nation ?
What the well is this ?
I have so many prove Rangers and paramilitary forces 1000s of Muhajir MQM workers who allow 2 victimized torture and killed Muhajir ?
As par UN lows no

These sort of incident provoke hate and provide opportunity to point scoring to so called political parties who claims to be saviour of democracy Army cheif made the right decision to call on inquiry I hope it will be transparent and bring out the truth ..what happened is to be condem ….

General Raheel Sharif just did what he is supposed to do to ‘hush hush’ this hot topic with some good lip service. Chaudhry Nisar is also waking up to make this inquiry look genuine and asking Rangers to not be involved with the inquiry due to conflict of interest but they can wriggle their way out by appointing a judicial commission as it always deliver to the expectation of the Emperor. These types of acts are nothing new in Pakistan. People of Baluchistan, KPK and Sindh are at the receiving end for a very long time. If political matters can be resolved by declaring them traitors then so be it. Two past governments have been dismissed on charges of extra judicial killings in Karachi. Journalists, political workers, political opponents, social workers have lost their lives but the status co remains unchanged and the system keeps moving without taking any action against those who did their assigned job to support the corrupt system. In civilized societies heads turn on these kinds of horrifying acts but we are far from any civilized society so system must go on till it completely falls apart.