Tourist Numbers to Turkey Surge in 2018 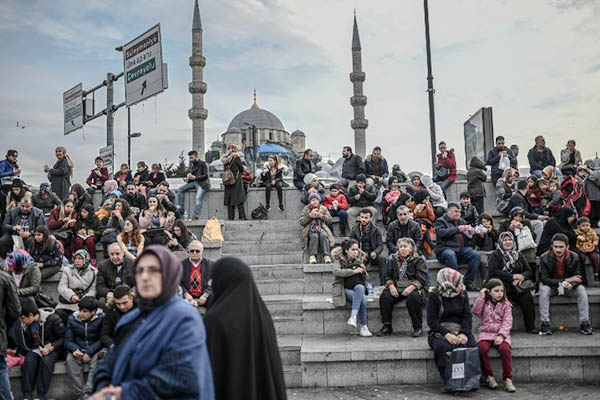 Nearly 40 million foreign tourists visited Turkey in 2018, an increase of more than 21 percent, according to tourism ministry figures released on Thursday.

The Turkish tourism industry has been recovering over the last couple of years after a spate of terror attacks in 2015 and 2016 seriously dented the sector as well as a failed coup in July 2016.

“Tourism in Turkey continues to rise and break the records of recent years,” the ministry said, adding that there was a rise of 21.84 percent in 2018 from 2017.

Turkey welcomed just over 46 million visitors in 2018, including 39.49 million foreigners and 6.62 million Turkish citizens from abroad. The number exceeded that of 2015 when 42 million visitors came to Turkey, before a decline of 24.6 percent was recorded in 2016.

The last major terror attack to hit Turkey was during New Year celebrations in 2017 when a gunman killed 39 people at an elite Istanbul nightclub.

Official data revealed that 81.8 percent of the income came from foreign visitors and 18.2 percent from Turkish citizens living abroad.

Nearly six million foreigners coming to Turkey in 2018 were from Russia—an increase of 26.49 percent compared with 2017—and 4.5 million visitors were from Germany, up by 25.88 percent from the previous year, according to the ministry’s statement.

Around 1.5 million people visited Ephesus in western Turkey—where the remains of one of the “Seven Wonders of the World,” the famous Temple of Artemis lies—in 2018. But in 2017, the figure was lower at 996,800 visitors, the tourism ministry said.

During one weekend in January, several groups of tourists were enjoying the Ephesus ruins, which were added to the UNESCO World Heritage list in 2015, and is the fifth most visited site in Turkey. Some of my friends warned me: “you know all the events that happened two, three years ago?” Shi, a Chinese tourist at Ephesus, said. “I think now it is OK. I don’t worry about that.”