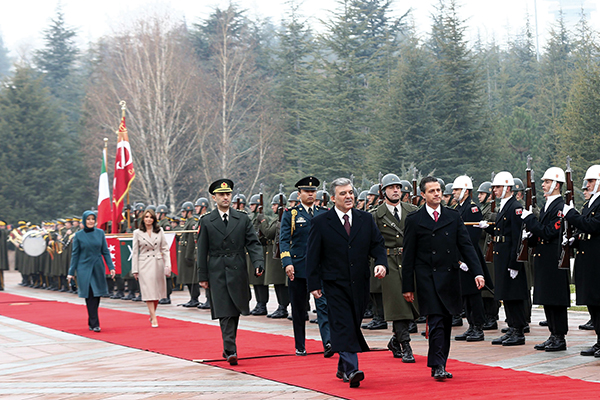 The tale of Turkey and Mexico.

[dropcap]T[/dropcap]here are just two country leaders to watch this year: One, in Mexico, is on his way up; the other, in Turkey, is about to crash.

In the post-9/11 world, Prime Minister Recep Erdogan became a poster boy for how an Islamist statesman can do it all. An elected leader of an established democracy, a reformer who managed to revitalize Turkey’s economy, Erdogan was living proof that the world’s largest religion can indeed coexist with modernist values and freedoms.

One admirer was U.S. President Barack Obama. Turkey’s geography and its declared foreign policy of “zero problems with neighbors” made it a key regional player. The chemistry between the prime minister and the president was good and, as Middle East volatility grew with the Arab Spring, Obama sought Erdogan’s advice more often than any other regional leader.

This month, however, their relations became prickly as the mercurial Erdogan, in office since 2003, threatened to expel Francis Ricciardone, the U.S. ambassador in Ankara. Erdogan accused the U.S. of interfering in his country’s inner political disputes, and Turkish government-affiliated media lobbed insults at the envoy.

“You are watching the collapse of an empire,” Turkish reporters quoted Ricciardone as telling European Union ambassadors in an Ankara gathering behind closed doors. Ricciardone, a fluent Turkish-speaking career diplomat, denied any such meeting even took place. In a tweet likely directed at Erdogan, he added that “no one should endanger U.S.-Turkish relations with unfounded claims.”

Nevertheless, Washington has ample reasons for concern. As the Obama administration attempts to convince Congress that the agreement over Iran’s nuclear program will not dismantle the sanctions regime, Turkey is tightening its financial ties with Tehran and signing major deals there.

Turkey is also violating existing international sanctions: At the heart of the corruption investigation that has rocked the Erdogan government are allegations of a transfer to Iran of gold, cleared by bribed officials of Turkey’s Halkbank. The gold, in turn, allowed Iranians to buy banned items that otherwise could not have been financed under strict banking sanctions.

Three cabinet ministers whose sons were arrested for alleged involvement in the bribery scheme have been forced to resign. Others were part of a major cabinet reshuffle. “I want to express my belief that the esteemed prime minister should also resign,” one of the ousted officials, environment minister Erdogan Bayraktar, told NTV in an interview after tendering his resignation.

The scandal has also exposed a major power struggle between Erdogan and preacher Fethullah Gülen, who helped Erdogan win three elections. Living in self-imposed exile in Pennsylvania, Gülen controls a movement of millions in Turkey. Gülenists run a vast education system and media outlets, and are well-placed in Turkey’s police and judiciary. The prime minister’s allies accuse Gülen of orchestrating the corruption probe in a political campaign to discredit the prime minister.

Erdogan is not one to take any of this lying down. He has summarily fired key judges and police officials involved in the scandal probe and accused America, Israel, and other foreigners of conspiring against him. Will such a robust response be enough to overcome some of the major challenges he faces in 2014?

Under Erdogan, Turkey managed to sail through the last decade’s global economic slowdown with relative ease. Now, however, the annual growth rate has slowed, from 4.5 percent in 2012 to 3.95 percent in 2013. Unemployment has soared to 10.77 percent.

Erdogan has accused the U.S. of interfering in Turkey’s internal political disputes.

And far from having “zero problems” with its neighbors, Turkey is at odds with all the region’s top powers. Last summer’s demonstrations over a planned project in Istanbul’s Gezi Park have grown into major ongoing unrest. The government’s response consists of harsh attacks against dissenters. Turkey boasts the world’s largest number of jailed journalists.

Erdogan’s first 2014 political challenge will come in March, when a fresh and charismatic candidate, Mustafa Sarigul of the Republican Peoples Party, will try to capture the powerful Istanbul mayoralty. If victorious, Turkey’s long-dormant secular liberal movement will be revived. In that case, Erdogan’s attempt to concentrate power in his own hands—by turning the parliamentary system into a presidential one and then run for the post this summer—will have suffered a major setback.

Erdogan’s imperial plan to take personal control of all political power will face fierce opposition from the secular left and Gülen’s right. So expect further unrest in the streets and perhaps even intervention by the country’s still powerful Army. Erdogan can either retire or edge one of NATO’s most powerful countries away from democracy and its Western alliances. Doing neither looks an increasingly unlikely option.

Meanwhile, Mexico’s President Enrique Pena Nieto managed to close 2013 with a bang—passing major reforms, some of which were never before deemed possible. After a year in power, he’s managed to turn his country’s image around, and raised the hopes of outside investors.

Pena Nieto dedicated his first year at Los Pinos, Mexico City’s presidential residence, to coalition building. The president’s Institutional Revolutionary Party (PRI) held power for 71 years before it was defeated by the right-of-center National Action Party (PAN) in 2000. After two dozen years in the wilderness, Pena Nieto emerged as a young, attractive PRI leader, surrounded by technocrats and able political doers. He managed to shed the PRI’s well-earned image of a staid, corrupt power hopelessly clinging to outdated leftist ideologies.

After his election, Pena Nieto quickly moved to quiet the left flank of his party and his critics by pledging smart government investments in infrastructure and schools. He made the tax system more progressive by taxing the rich more than the poor. PAN legislators, meanwhile, were also quieted with some major pro-market reforms.

Above all, this past month Pena Nieto managed to bring to an end the state monopoly of the oil market his own party introduced 70 years ago. This month’s constitutional changes allow outsiders to finally compete and help Mexico catch up with shale fracking and other modern extraction technologies. The reform is also expected to lower energy prices inside Mexico, further strengthening its middle class, which has grown steadily since PAN’s president, Vicente Fox, ousted the PRI from power in 2000. The economy grew by 2.61 percent this year, as opposed to 1.6 percent in 2012. It’s expected to grow further as a result of Pena Nieto’s reforms. Meanwhile, unemployment is down from 5.71 in 2012 to an almost nonexistent 3.74.

Obama could sure learn a thing or two from Pena Nieto’s coalition building and his successful maneuvering to silent fierce political opposition. The Mexican president has managed to revitalize his party’s brand. In the process, his country will be one of the globe’s most interesting places to watch this year—in a good way.