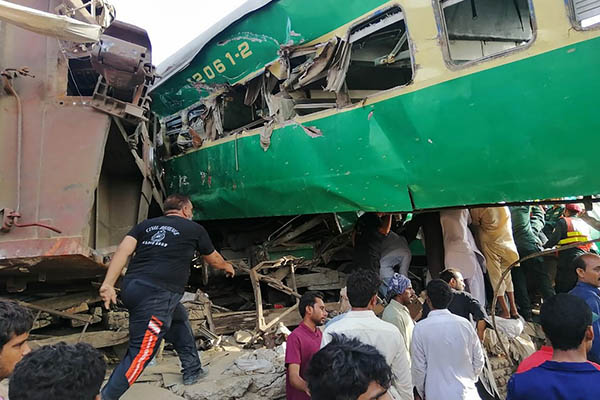 At least 11 people killed, 78 others injured

At least 11 people were killed and nearly 80 injured when two trains collided in Punjab province early on Thursday, officials said.

The incident took place in Rahim Yar Khan district when a passenger train coming from Lahore rammed into a goods train that had stopped at a crossing, a senior government official said.

A senior Pakistan Railways official gave AFP the toll, adding: “We fear the death toll will rise as rescue teams are still cutting [through] the wreckage.”

Earlier, local police officer Omar Salamat told Geo News that dozens had been taken to nearby hospitals. “The condition of three to four passengers is critical,” he said.

Train accidents are common in Pakistan, where the railways have seen decades of decline due to corruption, mismanagement and lack of investment. TV footage from the site showed the heavily damaged train engine and carriages, as emergency workers and local people used metal-cutting tools and heavy cranes.

Sheikh Rasheed Ahmed, the country’s minister for railways told TV channel Aaj that an investigation had been launched to determine the causes of the incident.

Prime Minister Imran Khan tweeted his condolences, adding: “Have asked Railways Minister to take emergency steps to counter decades of neglect of railway infrastructure & ensure safety standards.” Also on Thursday at least nine passengers were killed and 22 injured when a speeding bus overturned near the capital Islamabad, a police official said, while a landslide in the northwestern Swat valley killed six people, all from one family.