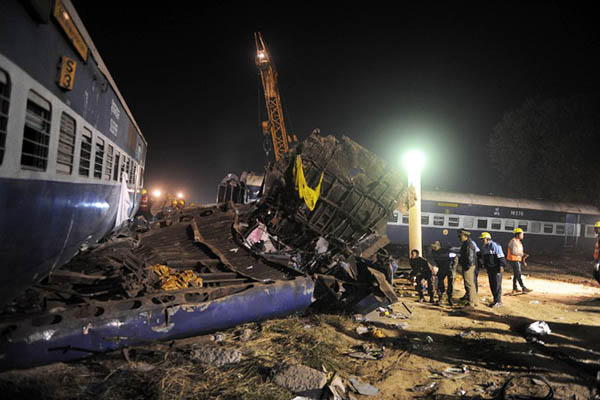 Hundreds more injured as many passengers remain unaccounted for.

The death toll from India’s rail disaster rose to 142 on Monday after workers toiled through the night removing victims from the wreckage, with grim warnings that more bodies were trapped inside.

There was little hope of finding survivors among the mangled remains of 14 carriages, which came off the tracks on Sunday in a rural district of the northern state of Uttar Pradesh. “The actual toll will still be higher and it would be a difficult task to identify all the persons, particularly those whose bodies are very badly damaged,” a senior local government official told AFP on condition of anonymity. “We do not have an exact figure for the injured as of now. Rescue work is still going on,” said district police chief Zaki Ahmad as workers cleared the most severely damaged carriages.

More than 2,000 people are believed to have been on the train, though many were traveling without reserved seats—or without tickets at all—making a precise estimate impossible. “It is difficult to say how many people were exactly traveling but it was definitely over 2,000,” said a spokesman for the regional railway network.

Emergency workers with sniffer dogs moved from carriage to carriage looking for signs of life as cranes and heavy machinery began moving sections of the wreckage. A large crowd had gathered at the site, with many combing through the bags and clothes strewn across the area in hopes of finding clues to the fate of their loved ones.

The disaster occurred at the peak of India’s marriage season, and at least one wedding party was on board the train. Local media said wedding clothes, jewelry and invitation cards could be seen spilling from abandoned bags.

Hundreds of injured were being treated in nearby hospitals, including many young children who had become separated from relatives. Police were reportedly showing the children pictures of the dead in an effort to identify their parents.

A fracture in the track is thought to have caused the Indore-Patna Express to derail at around 3 a.m., sending the carriages crashing into each other and leaving some twisted beyond recognition.

Railways minister Suresh Prabhu addressed a rowdy crowd of lawmakers in the lower house of parliament, promising to a thorough investigation. “Forensic enquiry has been ordered to look into all possible angles. Guilty will be given strictest possible punishment,” he said.

India’s railway network, one of the world’s largest, is still the main form of long-distance travel in the vast country, but it is poorly funded and deadly accidents occur relatively frequently. A 2012 government report said almost 15,000 people were killed every year on India’s railways and described the loss of life as an annual “massacre.”

The latest accident—one of India’s deadliest—comes at a time when the government has signed numerous deals with private companies to upgrade the ageing rail network. Last year Japan agreed to provide $12 billion in soft loans to build India’s first bullet train, though plans remain in their infancy.