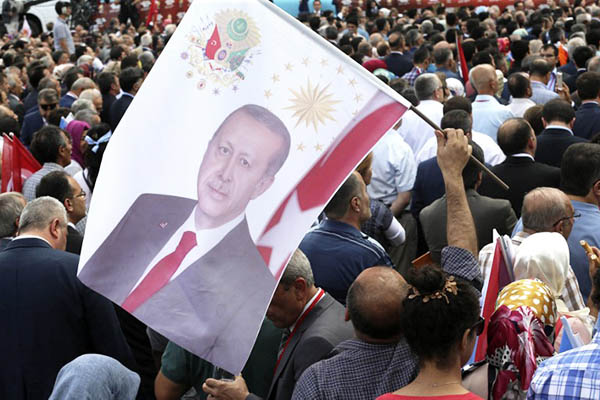 One month after coup bid, President Erdogan has driven through some of the most significant changes to his country since 1923.

With a thorough shake-up of its armed forces, a reassessment of foreign policy and the biggest purge in its modern history, Turkey has undergone a transformation in the month since the July 15 coup bid.

On the surface, street life has returned to its normal bustle in Istanbul and Ankara, where terrified residents witnessed bombings by fighter jets and tanks driving amok in the streets on the night of the attempted putsch. But the huge red Turkish flags hanging from public buildings, billboards hailing the coup’s defeat and pictures in metro stations of the “martyrs” killed are all reminders that life is not the same as it was before the events which began at around 1900 GMT on July 15.

The plotters, whom Ankara says were directed by the mysterious U.S.-based preacher Fethullah Gulen, sought to oust President Recep Tayyip Erdogan from power and impose a military regime. Instead, they were arrested en-masse, giving the president a chance to drive through some of the most significant changes in this country of 79 million since the foundation in 1923 of the modern Turkish Republic out of the ruins of the Ottoman Empire.

The authorities say the coup was driven by rogue Gulen loyalists within the military, which has been a pillar of the Republic since its foundation, and almost one half of its contingent of generals have since been detained and fired.

Erdogan has moved to bring the general staff and other military departments directly under his control and that of his government in a historic “civilianization” of an institution that had previously ousted governments three times by means of a coup. “A revolutionary civilianization process has been spearheaded by the government with the aim of further decreasing the scope of the military in politics and society,” Metin Gurcan and Megan Gisclon wrote in a paper for the Istanbul Policy Center (IPC).

They said the authorities could now choose between continuing the reforms in a democratic way or subduing the military without consultation. “A strategic turning point is now before Turkey.”

So far untouched by the shake-up is the powerful National Intelligence Agency (MIT), which has faced vehement criticism for failing to warn Erdogan about the coup. But the government has vowed it will also undergo restructuring.

The scale of the general crackdown after the coup has prompted accusations from the West of a witch-hunt. But Turkish officials say it points to the extent to which Gulen had penetrated all state institutions.

Over 76,000 people have been dismissed from their jobs, mostly in the education sector where Gulen’s influence was greatest and a total of over 35,000 people detained.

Ankara has swatted back the criticism of the West, angrily accusing it of failing to show solidarity in Turkey’s time of need and with pro-government media speculating that the United States even had a hand in the plot. Washington and Ankara could be heading for a collision course over Gulen, whom Turkey wants to see extradited from his secluded compound in Pennsylvania in a potentially fraught process.

Meanwhile, Turkey’s bid to join the E.U. that dates back to the 1960s is enduring its worst crisis in years as controversy simmers over the crackdown that prompted Austria to break a years-long taboo and call for accession talks to be stopped. “The failed coup wasn’t in any way a test that the E.U. or U.S. failed… The ‘test’ is for Turkey to rebuild itself as best it can,” said Marc Pierini, a former E.U. ambassador to Ankara and visiting scholar at Carnegie Europe. “West-bashing won’t help Turkey return to normalcy. It will just complicate matters.”

Erdogan’s popularity has surged in opinion polls and he has brought two opposition parties into talks on constitutional reforms—but has excluded the main Kurdish political force whom he accuses of links to militants.

The pro-Western tilt of Turkey—a NATO member since 1952—has been the cornerstone of its foreign policy ever since it troubled the Allies by staying neutral for almost all of World War II. In late June, Turkey moved to overcome a months-long diplomatic crisis caused by the shooting-down of a Russian warplane, and Erdogan’s first foreign visit after the coup was to meet President Vladimir Putin, raising fears that Ankara could be re-orientating its stance.

The Turkish leader, who had earlier castigated the West’s response to the coup, thanked Putin for expressing support so quickly and declared cooperation on key projects like a Black Sea gas pipeline was back on track. “In contrast to Western leaders, Putin is using the occasion to reset Russian-Turkish relations,” said Kemal Kirisci of the Brookings Institution. But he said that with 44 percent of Turkish exports going to the E.U. in 2014 and 4 percent to Russia, the “bloc is still Turkey’s economic lifeline.”