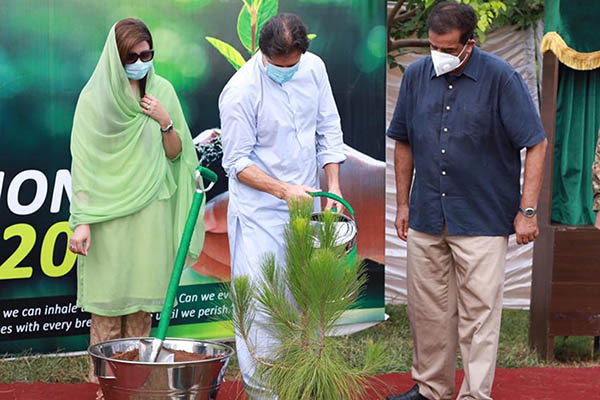 “Our wheat production has fallen over the past two years due to climate change and unprecedented rainfall,” he said, noting that Pakistan was among the top 10 countries that had been predicted to be most affected by global warming. “If we continue on this path, then some of our areas will become deserts,” he said. “It is our responsibility to make the country green for future generations,” he added.

The prime minister said that the government hoped to plant 3.5 million saplings in a single day, but said this was just the start. “This is a constant, ongoing battle,” he said, adding that the government had merely started the process and vowed to ensure trees were planted in “empty spaces” of cities.

Khan also urged women to participate in the campaign, saying their involvement was essential for it to succeed. He said that in addition to making the country ‘green’ through tree plantation, Pakistan also needed to focus on cleaning up its rivers. “First we have to make the country green by planting trees, but simultaneously we also have to focus on cleanliness and make our rivers clean once again. Planting trees will also help in cleaning our climate and lessening pollution,” he said.

The tree plantation campaign coincided with the government’s Tiger Force Day and the prime minister concluded his speech by thanking them for their efforts. “You are our future,” he said, and claimed their work had also helped to successfully reduce the spread of COVID-19 in the country.

Khan urged the public to not become complacent due to the decline in new infections of the novel coronavirus. “Wear a mask every time you leave the house,” he said, adding that people who did not do so were being “ungrateful” to God’s blessing.

The prime minister also appealed to Shia Muslims to take precautionary measures during Muharram processions. “This is a time for precaution. If God has blessed us, then we need to be thankful and wear a mask,” he said.

According to Special Assistant to the P.M. on Climate Change Malik Amin Aslam, the government had sought to plant 3.5 million indigenous fruit and non-fruit tree saplings nationwide on Sunday, with 2 million saplings to be planted in Khyber-Pakhtunkhwa; 1.2 million in Punjab; 303,646 in Pakistan-administered Kashmir; 57,000 in Balochistan; and 15,000 in Gilgit-Baltistan.