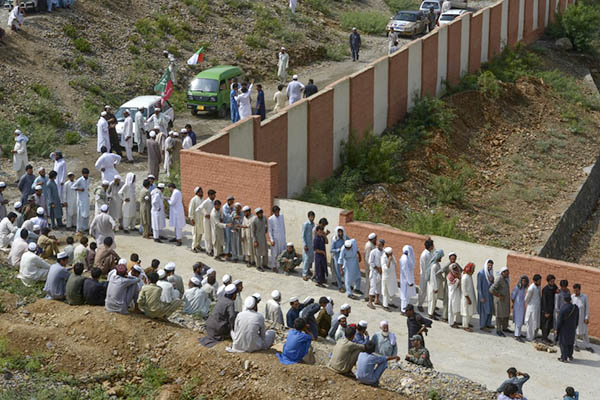 Tribesmen line up to cast their vote outside a polling station in Jamrud, Khyber-Pakhtunkhwa. Abdul Majeed—AFP

Pakistan’s tribal areas held their first ever provincial elections on Saturday amid high security, a key step toward bringing the northwestern region into the political mainstream after years of turmoil fueled by militancy.

The seven remote districts along the border with Afghanistan were once a focal point in the global war on terror but were brought under the control of Pakistani authorities after the passage of legislation last year.

More than 2.8 million people lined up to vote for 16 representatives for the provincial assembly after polls opened on Saturday morning, Suhail Khan, a spokesman for the election commission, told AFP. No violence was reported and polls closed at 5:00 p.m. without any disturbances, officials said.

The previously semi-autonomous region operated under a colonial-era arrangement that endorsed collective punishment and created a fertile environment for militancy.

The seven tribal districts—Bajaur, Khyber, Kurram, Mohmand, North Waziristan, Orakzai and South Waziristan—are home to some five million residents, mainly ethnic Pashtuns. They were previously only allowed to elect representatives for the National Assembly in Islamabad. Candidates from all the main political parties contested Saturday’s elections, including two women—a rarity in the conservative region.

The legislation passed last year extended the writ of Pakistani courts to the area, with hopes that it would bring development assistance to the region, which Washington has long insisted provides safe havens to militants including the Taliban and Al Qaeda—an allegation that Islamabad denies.

Security has improved in the region in recent years, with the Pakistani military carrying out multiple operations there. But lower-level attacks still occur and the area remains notorious for the availability of cheap guns, drugs and smuggled goods.