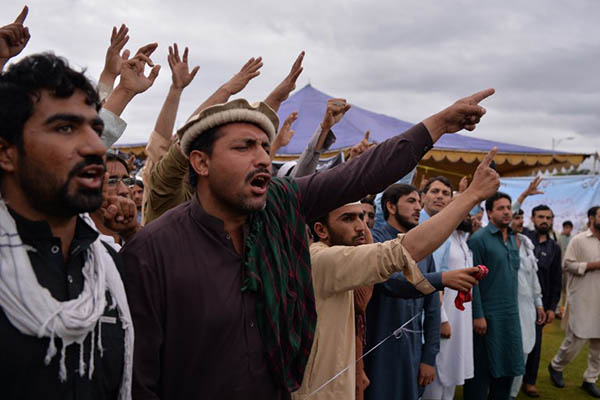 Thousands of protesters in Pakistan’s tribal belt along the Afghan border have ended a days-long protest against a string of recent assassinations, organizers said on Friday, as pressure mounts on the military over its security operations in the area.

Demonstrators and an AFP reporter in the area said more than 3,000 tribesmen launched the sit-in protest on Sunday in North Waziristan’s Mir Ali after three tribal elders were shot dead in the last week by unidentified gunmen in separate incidents.

“The protest ended on Thursday after authorities assured us of more security measures in the area,” Noor Islam, president of the ‘Youth of Waziristan’ that organized the rally, told AFP.

Islam said at least eight tribesmen have been killed in total in a series of murders this month, enraging locals who say authorities have not done enough to ensure their security.

Mohammad Ayaz—a senior government official in North Waziristan—confirmed that tribesmen ended the protest after receiving written assurance that officials would increase patrols in the area.

According to the agreement, seen by AFP, security forces will launch joint-patrols with tribal militias along with the deployment of more military troops and police officers to the area. Officials have also vowed to expedite compensation payments to families whose homes were damaged or destroyed in recent military operations.

North Waziristan was once a stronghold of the Pakistani Taliban, Al Qaeda and Haqqani network where the extremist groups operated with impunity and allegedly murdered hundreds of tribal elders.

The Army launched an operation under U.S. pressure in mid-2014 in a bid to wipe out militant bases in the area and end the near decade-long Islamist insurgency that has cost Pakistan thousands of lives.

Security has increased dramatically across the country in the operation’s wake.

However, people from the tribal belt are increasingly calling for investigations into abuses committed by the military during the offensive.

In February, the newly formed Pashtun Tahaffuz Movement began holding rallies across the country, demanding the formation of a commission to investigate extra-judicial killings and enforced disappearances by authorities. The group has also accused the military of backing insurgents fighting in Afghanistan, saying the policy has destabilized the tribal belt. The military has repeatedly denied backing militant groups.