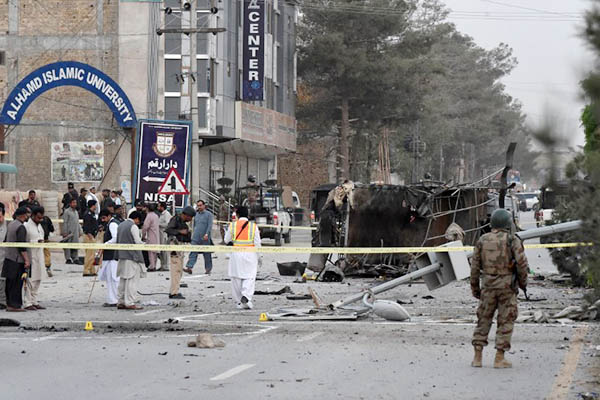 At least six policemen were killed and 15 security personnel were wounded on Tuesday when three suicide bombers blew themselves up in quick succession in southwest Pakistan, officials said.

The attacks hit Quetta, the capital of Balochistan province, where police and troops have been fighting Islamist militants and separatist groups for more than a decade.

“The first suicide bomber blew himself up outside a paramilitary frontier corps checkpost in the outskirts of Quetta city after he was spotted by the guards,” said Ghulam Ali Baloch, home secretary of Balochistan. “Just in the next moments, another bomber who was covering the first attacker exchanged fire with the security forces and later blew himself up.”

Some eight paramilitary officials were wounded in this attack, he said.

Around half an hour later a third bomber drove his motorcycle into a police truck on a road leading to the airport, killing at least six policemen, Baloch added.

Moazam Jah Ansari, Quetta’s police chief, confirmed the attacks and said the bombing of the police truck was so powerful that the vehicle overturned.

It was not clear whether the third bomber was wearing an explosive vest or if the bike was filled with explosives.

“Seven policemen were injured in this attack,” he said, adding that the three blasts may have been coordinated.

No group immediately claimed responsibility for the attacks.

Islamist militants and separatist groups have waged violence in mineral-rich Balochistan, which borders Iran and Afghanistan, for more than a decade. Balochistan is the largest of Pakistan’s four provinces but its roughly seven million people have long argued they do not get a fair share of its vast gas and mineral wealth.