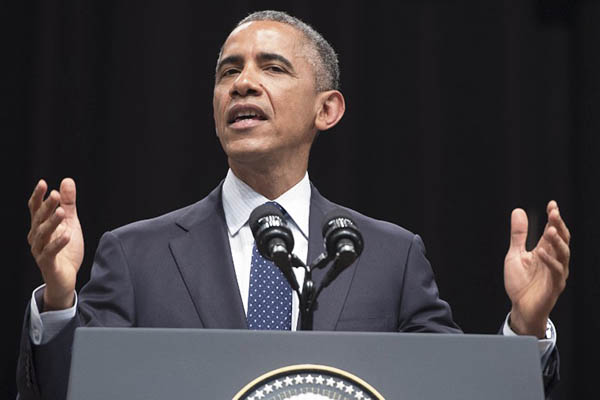 U.S. president says Afghan troops are not as strong as they need to be.

President Barack Obama on Thursday announced thousands of U.S. troops would remain in Afghanistan past 2016, retreating from a major campaign pledge and acknowledging Afghan forces are not ready to stand alone.

“Afghan forces are still not as strong as they need to be,” Obama said, adding that U.S. forces “can make a real difference” by remaining in the war-wracked country for much of next year.

Flanked by U.S. Defense Secretary Ashton Carter and Joint Chiefs of Staff chairman Joe Dunford, Obama said the United States will maintain its current force of 9,800 in the country through 2016. Then, rather than go down to a normal embassy presence as had been planned, the United States will leave a force of 5,500 troops in place to train Afghan forces and conduct counter-terrorism missions.

He said that while Afghan forces were improving and fighting to defend their country, the security situation remains “very fragile” and “in some places there is risk of deterioration.”

“If they were to fail, they would endanger the security of us all. And we’ve made enormous investment in a stable Afghanistan,” he said. “Afghans are making difficult but genuine progress. This modest but meaningful extension of our presence, while sticking to our current, narrow missions can make a real difference,” he said.