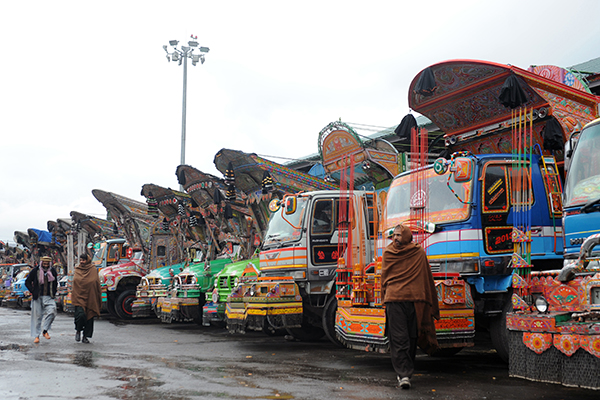 India expresses surprise at cross-border trade being ‘held hostage’ for the sake of ‘drug traffickers.’

The 49 truck drivers, grizzled men from the mountains of Kashmir, were on a routine job dropping goods across the de facto border between Pakistan and India when a drugs bust left them stranded. For more than a week, the men from the Pakistani side of the divided region, one of the world’s most sensitive fault-lines, have been stuck in the middle of a row that reflects the difficulty in boosting regional ties through trade.

Last Friday, Indian police along the treacherous mountain road leading between the two sides seized a truck and arrested its driver after 114 kilograms of heroin were found concealed in a consignment of almonds.

Pakistani authorities then refused to let the other trucks in the convoy, or the 48 other drivers, back across the heavily-militarized Line of Control unless the arrested man was returned as well. They also detained 27 Indian trucks and their drivers, who had crossed over on the same day to deliver goods as part of a barter-trade agreement that was started as a “confidence-building measure” in 2008.

“We are becoming a tragic movie ourselves,” said 30-year-old Ahsan Awan from Muzaffarabad, the capital of Pakistan-administered Kashmir, who was huddled inside a hall at the Trade Facilitation Center in Salamabad, 115 kilometers from India-administered Kashmir’s Srinagar, watching a Bollywood film on cable TV.

Under Indian law, smuggling or possessing narcotics is a serious offence that lands an accused in jail without bail. “We cannot release the driver. We have sent a report to the home ministry in New Delhi,” said deputy inspector-general of police J. P. Singh. “The case will be decided in our courts or between New Delhi and Islamabad. We have not received any directions from New Delhi yet,” he added.

Ties between India and Pakistan are languishing at present—neither openly hostile nor noticeably warming—with the current government in Delhi widely expected to change after elections due by May. Border skirmishes last year, in which more than a dozen soldiers died on both sides, chilled relations between the neighbors.

“We are talking with the Pakistan foreign ministry. We are hopeful of finding a diplomatic solution,” Indian foreign ministry spokesman Syed Akbaruddin told reporters on Thursday. He said he was surprised that trade in Kashmir was being “held hostage for the sake of persons indulging in drug trafficking.”

Commercial ties were given a big push in 2012 when both sides were looking to repair the damage of the 2008 Mumbai attacks. A second trade gate was opened south of Kashmir and the number of trucks able to cross daily was increased. New relaxed visa regimes were put in place. Pakistan even said it would grant India most-favored-nation status, which would give Indian firms greater market access—a change that is still to take effect 12 months after a deadline to complete the process.

Prior to this spat, the results were starting to show. Trade between the neighbors jumped 36 percent to $2.6 billion in 2013, according to the Indian Department of Commerce.

While the diplomats in New Delhi and Islamabad wrangle over the holdup in Kashmir, the drivers from the Pakistani side have refused to go home without their colleague. “We are not allowed to inspect the sealed goods; we just count the number of packs. The authorities on both sides do the checking,” said driver Awan, adding that he would “think twice” before agreeing to transport goods across the Line of Control again, for which he earns Rs. 1,000 a trip.

Theirs is a life of battling severe security restrictions, red tape, and long waits on icy mountain roads before the authorities clear them to cross the border. Their ornate trucks trundle through steep valleys along the River Jhelum flowing from the Indian side in the Himalayas. “We have not had a bath for a week or changed clothes. We can’t even offer prayers in this condition,” complained driver Hameedullah Awan.