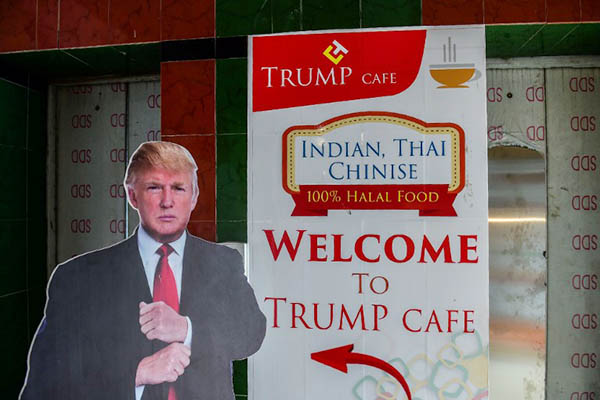 Café owner defends controversial showcase of U.S. president by claiming he would not have visited Saudi Arabia if he were anti-Muslim

A café in Dhaka named after Donald Trump has been luring Bangladeshis undeterred by his controversial politics and more interested in snapping selfies with a life-size cutout of the U.S. president.

The café was opened in January by a self-professed Trump fan who rejects the notion that the U.S. president is ‘anti Islam,’ saying diners at his café in the heart of Muslim-majority Bangladesh agreed.

“If he were anti-Muslim, he would not have visited Saudi Arabia and had a good time there,” café owner Shafiul Islam told AFP, adding none of Trump’s decisions had affected Bangladesh’s 144 million-odd Muslims.

Politics appears to be last thing on many diners’ minds as they pose for photos with a cardboard cutout of the U.S. president, placed strategically at the entrance by 29-year-old businessman Islam. “Girls are his bigger fans. They come to take selfies with the Trump picture. Children love him too,” he said, adding more visitors snapped photos than ordered food.

The café serves Thai, Chinese and Indian dishes, with specials given names like the “Trump burger.” CNN is broadcast to give an extra American flavor, while the WiFi password is “Ivanka Trump.”

But it’s the pull power of the man himself bringing in curious customers.

“The best part is the sudden illusion when you enter the café and see the U.S. president welcoming you at the door!” she said.