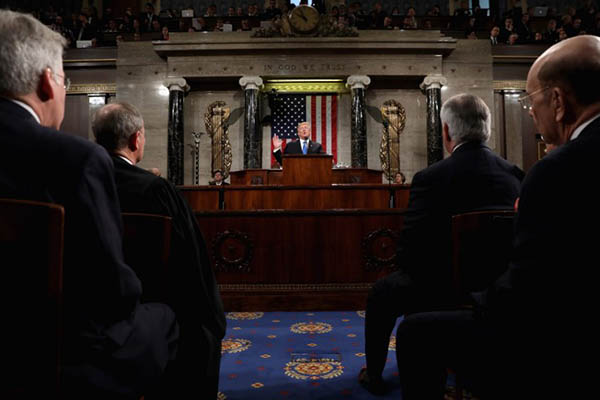 U.S. President Donald Trump made a pitch for national unity and strong borders in his maiden State of the Union address on Tuesday, calling for “one American family” after a year plagued by acrimony, division and scandal.

Delivering his biggest speech of the year, this most polarizing of presidents sought to put the spotlight on a robust Trump economy, while pointedly calling on a packed joint session of Congress to enact hardline curbs on immigration.

“Tonight, I call upon all of us to set aside our differences, to seek out common ground, and to summon the unity we need to deliver for the people we were elected to serve,” he said. “Tonight, I want to talk about what kind of future we are going to have, and what kind of Nation we are going to be. All of us, together, as one team, one people, and one American family.”

Trump’s opening tone was uncharacteristically conciliatory, although it bridged no compromise on his drive to reduce immigration—which he painted as responsible for a plethora of social ills. He touched on a range of foreign policy issues—including, in an emotive moment, offering the spotlight to crippled North Korean amputee defector Ji Seong-ho, who waved a crutch in the air as he received a prolonged standing ovation.

Trump warned that Pyongyang’s “reckless” nuclear drive could “very soon” threaten the U.S. homeland, while also eyeing the geopolitical challenge posed by adversaries China and Russia. But Trump’s State of the Union, the third longest on record at one hour twenty minutes, was overwhelmingly focused on domestic concerns.

Among those looking on were dozens of cross-armed Democratic lawmakers, some decked in black to honor the victims of sexual harassment and still others wearing butterfly stickers in support of immigrants—two social issues that more than any others have roiled America in the age of Trump.

Over the years the State of the Union address, a set piece of the American political calendar, has lost some of its impact and pizzazz. But the primetime address, watched by as many as 40 million Americans, was still a once-in-a-year opportunity for Trump to speak to the nation and mend his sunken approval ratings, languishing around 40 percent.

Seeking to enliven his own base, Trump spoke at length on the need for immigration reform, drawing hisses from the opposition as he equated immigrants with criminality and economic tension and spoke of “chain migration.” For decades, he lamented, “open borders” had allowed “drugs and gangs to pour into” the United States. He again called for the construction of a border wall that remains unfunded in Congress.

“They have allowed millions of low-wage workers to compete for jobs and wages against the poorest Americans. Most tragically, they have caused the loss of many innocent lives.” Two couples whose daughters were murdered by MS-13, a Salvadoran gang, were among those joining the First Lady to watch the address.

“The United States is a compassionate nation,” he said, “but as president of the United States, my highest loyalty, my greatest compassion, and my constant concern is for America’s children, America’s struggling workers, and America’s forgotten communities.”

The 71-year-old real estate mogul and reality TV star touted a long bull run on Wall Street and improving growth rates, something the White House has dubbed a “Trump bump.”

“The stock market has smashed one record after another, gaining $8 trillion in value,” he said, even though that narrative suffered a setback on Tuesday when stocks suffered their biggest drop in eight months amid fears of a bubble.

Trump also lifted his economic gaze beyond the United States, calling for “fair” trade and declaring that “the era of economic surrender is over.”

“America has also finally turned the page on decades of unfair trade deals that sacrificed our prosperity and shipped away our companies, our jobs, and our wealth—our nation has lost its wealth but we’re getting it back so fast.”

And there was a partisan-tinged focus on terror, which had been a central message of his campaign. Trump vowed to keep the Guantanamo Bay prison open—anathema to Democrats and many Republicans.

Offering the Democratic rebuttal to Trump’s address, Joe Kennedy—grandson of Bobby Kennedy—said it would be “easy to dismiss this past year as chaos, as partisanship, as politics.”

“But it’s far, far bigger than that,” he said. “This administration isn’t just targeting the laws that protect us, they’re targeting the very idea that we are all worthy of protection.”

Here are some key points from Donald Trump’s speech:

Trump—one of most divisive and controversial presidents in U.S. history—sought to highlight things that Americans share, and appealed to the power of unity: “All of us, together, as one team, one people, and one American family can do anything.”

Trump said the time has come to “rebuild our crumbling infrastructure,” calling on Congress to draft legislation that “generates at least $1.5 trillion for the new infrastructure investment that our country so desperately needs.”

“We will build gleaming new roads, bridges, highways, railways, and waterways all across our land,” he said.

Current immigration policies allow “drugs and gangs” to pour into the country and facilitated recent extremist attacks, Trump said, reiterating his four-pillar plan for immigration reform and calling on Congress to take action. “It’s time to reform these outdated immigration rules, and finally bring our immigration system into the 21st century,” Trump said.

China and Russia are economic rivals who challenge U.S. interests and values, and North Korean missiles “could very soon threaten our homeland,” Trump said. The solution? “Unmatched power,” which he said “is the surest means to our true and great defense.”

Trump also called for Congress to authorize “all necessary power” for the U.S. to detain “terrorists” captured abroad, and for the detention facility at Guantanamo Bay to be kept open.