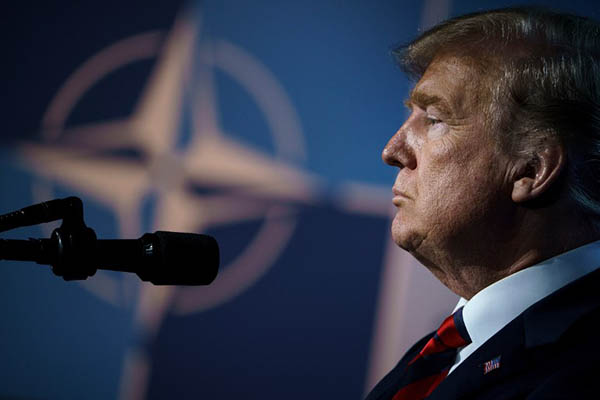 Donald Trump said NATO leaders agreed on Thursday to a big boost in defense spending after crisis talks in Brussels, but France’s Emmanuel Macron appeared to contradict the U.S. president.

Trump claimed victory after bitterly criticizing key allies, notably Germany, for failing to pay their way at one of the most fractious summits in NATO’s 70-year history. He triggered an emergency session on the spending issue, before emerging from the turmoil to say “I believe in NATO” in response to reports that he had threatened to pull out.

“Tremendous progress has been made, everyone’s agreed to substantially up their commitment, they’re going to up it at levels they’ve never thought of before,” Trump told a press conference before leaving for a visit to Britain. “It’s been amazing to see the level of spirit in that room.”

Trump blazed into the summit on Wednesday by demanding that allies reach their commitment to increase spending to two percent of GDP “immediately”—instead of by 2024 as previously agreed. He then stunned allies by telling them to eventually double the figure to a punishing four percent.

But Macron disputed Trump’s claims, saying that the joint statement the leaders had signed went no further than what had previously been agreed, apart from setting out how some countries plan to get there. “The communiqué is clear: it reaffirms the commitment to two percent [of GDP],” said Macron, who was photographed smiling and sharing a hug with Trump on Wednesday despite recent tensions between the two.

In an apparent swipe at Trump, he added: “Sometimes the corridors, comments and tweets take on more importance than what is negotiated, said or endorsed by heads of state.”

Macron however added that he thought NATO was now “much stronger” and dismissed reports that Trump had threatened to pull the United States out of NATO if the spending row was not resolved.

Trump himself said that “the U.S. commitment to NATO remains very strong” and withdrawing was “unnecessary.”

NATO Secretary General Jens Stoltenberg took a more diplomatic approach on the spending row, saying that Trump was having an “impact” while refusing to confirm any increase beyond what was agreed in the statement. “We understand this U.S. president is very serious about defense spending and this is having an impact,” Stoltenberg said. “Since President Trump was in Brussels last spring allies have added 41 billion extra for defense spending.”

Despite that, Stoltenberg had been forced to call an extraordinary session of all 29 allies to discuss Trump’s demands, in what officials said was one of the first of its kind at a NATO summit for a decade. Apart from the U.S., only three NATO countries hit the two-percent target in 2017—Britain, Greece and Estonia—but four more are expected to clear the threshold this year.

The summit came as transatlantic ties are already under strain due to U.S. trade tariffs, along with fears that Trump’s summit on Monday with Russian President Vladimir Putin will pull him further from NATO’s orbit.

With allies fearing he could strike some sort of deal with NATO’s key adversary, Trump said that he saw Putin as a “competitor” but not an “enemy.”

Trump insisted that he would bring up key subjects including Syria, although he once again failed to rule out recognizing Russia’s annexation of Crimea. He also vowed to raise allegations of Russian meddling in the 2016 U.S. presidential election, amid an ongoing U.S. investigation into whether his campaign colluded with Moscow.

Trump himself accused Germany of being a “captive” of Russia due to a multi-billion-dollar pipeline deal, complaining that Germany and other NATO allies “pay only a fraction” of the cost of defending Europe.

Trump had explicitly linked NATO with a transatlantic trade row by saying the E.U. shut out U.S. business while expecting America to defend it, singling out Germany for particular criticism. “Germany just started paying Russia, the country they want protection from, Billions of Dollars for their Energy needs coming out of a new pipeline from Russia. Not acceptable! All NATO Nations must meet their 2% commitment, and that must ultimately go to 4%!” Trump tweeted on Thursday morning before the second day of talks.

Trump has said next week’s meeting with Putin “may be the easiest” part of his European tour.

From Brussels, he flew to Britain where the government is in crisis over Brexit and where tensions with Russia have spiked after London blamed Moscow for the death this month of a British woman from contact with the Novichok nerve agent. Trump poured fuel on the Brexit fire during his NATO press conference, saying he was not sure that Britons had voted for the Brexit plan presented by Prime Minister Theresa May, which has triggered a British cabinet rebellion.

“The people voted to break it up [Britain’s ties with the E.U.],” Trump said. “So I would imagine that’s what they will do, but maybe they will take a little bit of a different route. I don’t know that is what they voted for.”

May hit back, saying that she was “delivering on the vote of the British people.”