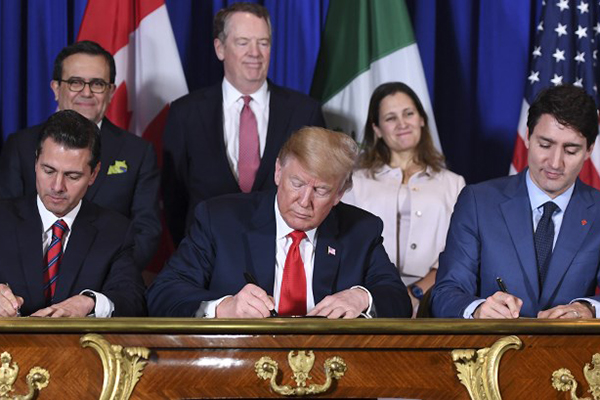 U.S. president terms revamped NAFTA an ‘incredible milestone’ that will be envied by other nations

The leaders of the United States, Mexico and Canada on Friday signed a huge regional trade deal to replace the old NAFTA, denounced by President Donald Trump as a killer of U.S. jobs.

“This is a model agreement that changes the trade landscape forever,” Trump said at the signing ceremony in Buenos Aires, on the sidelines of a G20 leaders’ summit. Trump said negotiating the deal known in Washington as the U.S.-Mexico-Canada Agreement, or USMCA, had seen the leaders take “a lot of barbs and a little abuse.” But he insisted that the “incredible milestone” would aid U.S. workers, especially in the auto industry, while putting in place “intellectual property protection that will be the envy of nations all around the world.”

Canadian Prime Minister Justin Trudeau was less effusive about the renegotiated pact, but said the USMCA would resolve the threat of “serious economic uncertainty” that “would have gotten more damaging.”

While praising the “historic” nature of the deal, Trudeau also told Trump that the progress gave “all the more reason why we need to keep working to remove the tariffs on steel and aluminum between our countries.”

Mexican President Pena Nieto, on his last day in office, called the revamped version of NAFTA important in shoring up “the view of an integrated North America with the firm belief that together we are stronger and more competitive.”

For Trump—whose G20 diplomacy is overshadowed by legal troubles back home and his abrupt cancellation of a bilateral meeting with Russian President Vladimir Putin—the signing was a victory. He said he did not foresee a problem in getting congressional approval. “It’s been so well reviewed I don’t expect to have very much of a problem,” Trump said.

On Saturday, he will meet with Chinese counterpart Xi Jinping to address the trade war triggered by Trump’s insistence on China ending what he says have been decades of unfair trade practices.

While the leaders presented a united front, Trump’s tearing up of the old NAFTA, which he has repeatedly ridiculed, was a shock to the system that prompted months of severe tensions between the long-peaceful neighbors. Trump himself acknowledged that it hadn’t been easy, but said “battles sometimes make great friendships.”

Even at the signing ceremony, there were echoes of the uncomfortable background to the USMCA, which Trump has made exhibit number one in his case to voters that he is putting “America first.”

All three leaders stood at lecterns adorned with the U.S. presidential seal, with Trump taking the middle position. But while Trump proudly refers to the USMCA—a title that again puts the United States in the leading position—Trudeau pointedly called the deal being signed the “new North American Free Trade Agreement” and the “modernizing NAFTA.”

Mexico has its own version in Spanish, accentuating its name first.

For the Sierra Club, a U.S. environmentalist group, the “hastily sealed” deal will promote Trump’s “polluting legacy for years after he leaves office [via] special handouts to corporate polluters like Chevron and ExxonMobil.” But in a statement, U.S. Treasury Secretary Steven Mnuchin said the updated pact “marks a critical step in modernizing and rebalancing North American trade.”

“The new agreement secures strong outcomes for farmers, ranchers, businesses, and workers across North America, including in areas such as auto manufacturing and intellectual property.”