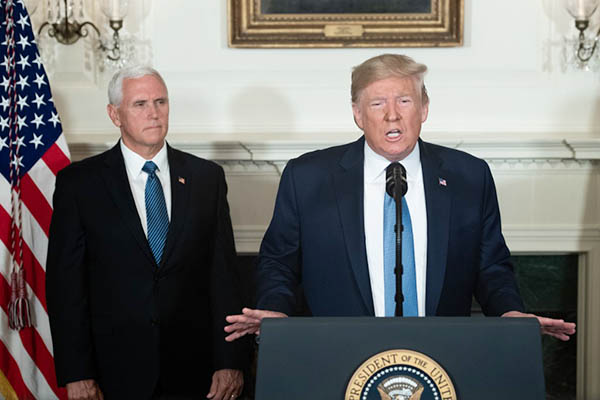 As flags flew at half-mast at the White House and across the country and the death toll edged up by two, Trump offered an unusually direct condemnation of racists as he took on the role of consoler-in-chief, which he is expected to reprise during a visit to Texas on Wednesday. But as the country tried to digest weekend shootings at a Walmart store in El Paso, Texas that left 22 dead and another in which nine victims were slain outside a bar in Dayton, Ohio, Trump offered little in the way of new ideas for a country awash with guns and painfully accustomed to mass shootings.

He stressed that mental illness was the main culprit fueling mass shootings in America, as opposed to the ready availability of firearms or extremist thinking. But in a rare intervention in political matters, former president Barack Obama said divisive rhetoric from U.S. leaders was part of the problem.

“We should soundly reject language coming out of the mouths of any of our leaders that feeds a climate of fear and hatred or normalizes racist sentiments,” Obama said in a statement.

El Paso Police Chief Greg Allen said Monday that one German, 13 Americans, seven Mexicans and one as yet unidentified person were killed. Mexico’s foreign minister, Marcelo Ebrard, condemned the massacre as an “act of terrorism” against his country’s nationals, saying that eight, not seven, had died and releasing their names.

At the sites of America’s latest mass shootings—numbers 250 and 251 so far this year—people came to honor the dead. Makeshift memorials with candles, flowers, heart-shaped balloons and posters with messages of condolence sprang up outside the Walmart in Texas and the Dayton bar.

“You are loved,” read an inscription on a small yellow cardboard heart placed outside the Ned Peppers bar. Outside the Walmart store that was attacked Saturday, people paused to pay their respects at the memorial. Balloons shaped like stars—Texas is the Lone Star State—fluttered in the breeze. One poster read: “A date never to forget: August 3, 2019.”

In his brief address, Trump made no mention of two ideas he had tweeted hours earlier: tightening background checks and linking gun control reform to changes in immigration law. The president did say he supported “red flag” laws allowing authorities to confiscate weapons from people believed to present grave risks.

In Texas, 27 people were wounded, and another 26 were hurt in Ohio, where the shooter was killed in roughly 30 seconds by police who were patrolling nearby.

Dayton Police Chief Richard Biehl told a news conference on Sunday that the shooter—a 24-year-old white man called Connor Betts—wore a mask and a bulletproof vest and was armed with an assault rifle fitted with a 100-round drum magazine. His sister, who had gone with him to the scene, was among those killed.

Police said on Monday they had no evidence that race played a part in the Dayton shooting.

In Texas, police said the suspect surrendered on a sidewalk near the scene of the massacre. He was described in media reports as a 21-year-old man, also white, named Patrick Crusius. He was believed to have posted online a manifesto denouncing a “Hispanic invasion” of Texas. El Paso, on the border with Mexico, is majority Latino.

Police said the suspected shooter has been charged with capital murder and could face the death penalty, while a federal official said investigators were treating it as a case of domestic terrorism.

Despite a string of horrific mass shootings in the U.S., where gun culture is deep-rooted, efforts to strengthen firearms regulations remain divisive. On Twitter Saturday, Trump described the El Paso attack as “an act of cowardice.”

But critics said the president’s habit of speaking in derogatory terms about immigrants is pushing hatred of foreigners into the political mainstream and encouraging white supremacism. “To pretend that his administration and the hateful rhetoric it spreads doesn’t play a role in the kind of violence that we saw yesterday in El Paso is ignorant at best and irresponsible at worst,” said the Southern Poverty Law Center, a major civil rights group.

It cited Trump actions such as calling Mexican migrants rapists and drug dealers and doing nothing when a crowd at a Trump rally chanted “send her back” in reference to a Somali-born congresswoman.