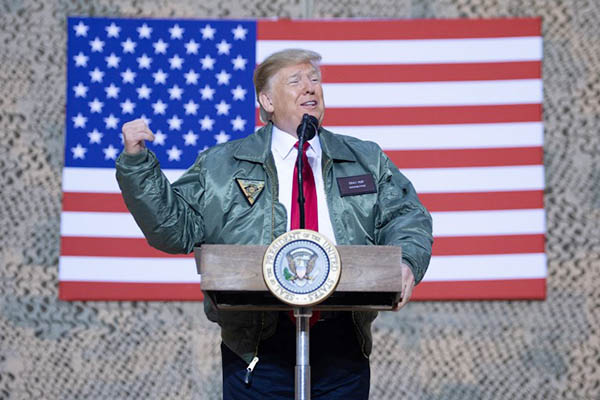 U.S. president says America will no longer be taken ‘advantage of’ by those who use its ‘incredible military’ for free

President Donald Trump used a lightning visit to Iraq—his first with U.S. troops in a conflict zone since being elected—to defend the withdrawal from Syria and declare an end to America’s role as the global “policeman.”

Trump, accompanied by his wife Melania, landed late Wednesday at Al-Asad Air Base in western Iraq after what he described as a stressful, secrecy shrouded flight on a “pitch black” Air Force One.

He spoke to a group of about 100 mostly special forces personnel and separately with military leaders before leaving a few hours later after a visit that sparked controversy in Iraq. A planned meeting with Iraqi Prime Minister Adel Abdel Mahdi was scrapped and replaced by a phone call, the premier’s office said. Trump invited Abdel Mahdi to visit Washington and he accepted, according to the White House.

The president was seen shaking hands with camouflage-clad personnel, signing autographs and posing for photos at the base.

Morale-boosting presidential visits to U.S. troops in war zones have been a longstanding tradition in the years following the Sept. 11, 2001 terror attacks. Trump has been soundly criticized for eschewing such a trip in the first two years of his presidency. But speculation had been mounting that he would finally make the gesture following his controversial plan to slash troop levels in Afghanistan and his order to withdraw entirely from Syria.

Trump sought to defend his “America First” policy of pulling back from multinational alliances, including what to many Americans seem like the endless wars in the Middle East. “It’s not fair when the burden is all on us,” he said. “We don’t want to be taken advantage of any more by countries that use us and use our incredible military to protect them. They don’t pay for it and they’re going to have to.” He added, “We are spread out all over the world. We are in countries most people haven’t even heard about. Frankly, it’s ridiculous.”

Trump told reporters he had overruled generals asking to extend the Syria deployment, where about 2,000 U.S. forces, joined by other foreign troops, assist local fighters battling the Islamic State jihadist group (I.S.). “You can’t have any more time. You’ve had enough time,” he said he told the top brass.

Trump’s visit appeared to take Iraqi authorities by surprise and prompted criticism, including from former prime minister Haider al-Abadi. The way in which Trump visited was “not commensurate with diplomatic norms and relations with sovereign states,” Abadi said. “Dealing with Iraq and its sovereignty in this way will harm Iraqi-U.S. relations,” he said.

Iran-backed groups that make up a key bloc in the Iraqi parliament reacted angrily. Shia movement Harakat al-Nujaba said the presence of U.S. forces in Iraq was a “violation of the country’s sovereignty” and it was “now the duty of the government to expel American forces.” It said, “Trump’s disrespect of Iraq’s sovereignty will not go unpunished,” adding it would “not allow Iraq to be a base used to threaten other countries.”

The head of the Asaib Ahl al-Haq pro-Iran paramilitary group, Qais al-Khazali, tweeted that “Trump’s visit to a U.S. military base without regard for diplomatic norms reveals the reality of the American project in Iraq.” The Iraqi response, he said, “would be the parliament’s decision to remove your military forces” unilaterally.

Trump’s troop drawdowns—and the abrupt way that they were announced—helped trigger the resignation of his defense secretary, Jim Mattis, who has been one of the administration’s heavyweights. But the president has made disentangling America from its wars a priority since his 2016 election and he said in Iraq that the U.S. would no longer be treated as “suckers.”

I.S., which once controlled swaths of territory in Iraq and Syria, has been driven mostly into hiding. On Wednesday, Trump said “we’ve knocked them out,” although he added Iraq might be used as a future base “if we wanted to do something in Syria.”

According to a transcript released by the White House, he thanked troops for the “near-elimination” of I.S., and said some U.S. troops from Syria “will come here for a stay, but a lot of them are going to be going back home.”

According to Trump, the flight into Iraq was unlike anything he’d previously experienced. “If you would have seen what we had to go through in the darkened plane with all windows closed with no light anywhere—pitch black,” he said.

After departing Iraq, Trump stopped over at Ramstein Air Base in Germany, before flying on to the United States, with Air Force One touching down early Thursday at Joint Base Andrews outside Washington.