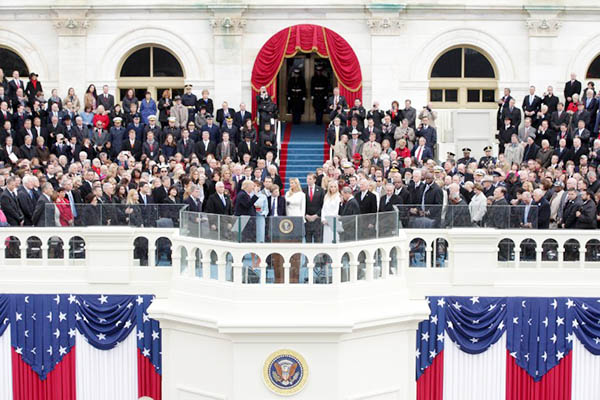 President Donald Trump vowed in his inaugural address on Friday that every U.S. decision would be guided by a vision that puts “only America first.”

“Together we will determine the course of America and the world for many, many years to come,” said the 70-year-old Republican before the nation’s top political dignitaries and hundreds of thousands of supporters massed on the National Mall. “We will face challenges. We will confront hardships, but we will get the job done. From this day forward, a new vision will govern our land. From this day forward, it’s going to be only America first,” Trump vowed. “Today we are not merely transferring power from one administration to another or from one party to another, but we are transferring power from Washington, D.C. And giving it back to you, the people,” he pledged.

Trump also used his inaugural address to place the battle against Islamic extremism at the heart of his foreign policy. “We will reinforce old alliances and form new ones and unite the civilized world against radical Islamic terrorism, which we will eradicate completely from the face of the earth,” he declared.

Trump’s language suggests he sees the fight as a civilizational battle between America and a threat springing from the Islamic faith itself. And, in an inaugural address otherwise very thin on policy specifics, his vow to form new alliances against terror suggests that he intends to work with Vladimir Putin’s Russia.