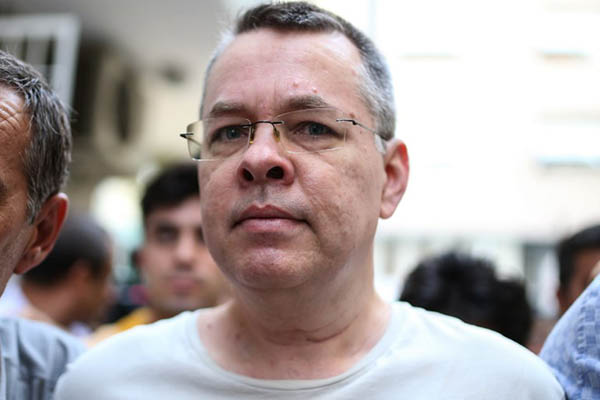 Andrew Brunson, who ran a Protestant church in the Aegean city of Izmir, was first detained in October 2016 on terror-related charges. Brunson was moved from jail to house arrest on Wednesday, but Secretary of State Mike Pompeo said the move was “not enough”—and Trump doubled down on Thursday.

“He is suffering greatly,” Trump said of the 50-year-old pastor. “This innocent man of faith should be released immediately!”

Ankara almost immediately shot back at Trump, warning it would “never tolerate threats.”

“No one dictates to Turkey. We will never tolerate threats from anybody. Rule of law is for everyone; no exception,” Turkey’s Foreign Minister Mevlut Cavusoglu wrote on Twitter. A top Turkish official said that Cavusoglu and Pompeo spoke by telephone on Thursday about the escalating row.

The Trump administration has made defending Christians abroad a tenet of its foreign policy. “The United States will impose large sanctions on Turkey for their long time detainment of Pastor Andrew Brunson, a great Christian, family man and wonderful human being,” Trump said.

The escalating war of words between Washington and Ankara risks worsening already poor ties, which hold enormous military and economic importance for both countries. The United States has long used bases in Turkey for operations across the Middle East, but relations have been strained by Washington’s support for Kurdish fighters in Syria.

“The decision of the Turkish court not to release Brunson deals a further blow to an already tense relationship,” said Gonul Tol of the Washington-based Middle East Institute. “The fact that Brunson was moved to house arrest indicates Ankara got the message but still has plans to use Brunson as a trump card in other outstanding issues in bilateral ties,” she said. “But Trump’s and Pence’s tweets threatening sanctions puts Turkey’s Erdogan in a difficult spot. If he heeds, he will look weak to his constituency. If he does not, he will face sanctions.”

Brunson still faces up to 35 years in jail if convicted of carrying out activities on behalf of two groups Turkey deems terror organizations. One is led by the U.S.-based Muslim preacher Fethullah Gulen, who Ankara says was behind a 2016 failed coup, while the other is the Kurdistan Workers’ Party (PKK).

Brunson, who is barred from leaving the country, is set for his next hearing on Oct. 12. The pastor denies the charges and his defense team argues the case is built on questionable witness statements that should never have been brought to court.

Brunson is one of tens of thousands of people detained on similar charges during the state of emergency declared by Erdogan in the wake of the 2016 failed coup bid. The measure ended on July 18. But the Turkish parliament on Wednesday passed a new “anti-terror” law that strengthens the authorities’ powers in detaining suspects and imposing public order.

U.S. Vice President Mike Pence said Thursday at a conference on religious freedom in Washington that “there is no credible evidence” against Brunson.

Last week, a bipartisan group of U.S. senators introduced a bill that would require Washington to reject international loans to Turkey until Brunson and other Americans are freed or the harassment against them ends. “I find it difficult to see how this relationship moves forward… if the Turkish government continues to detain Pastor Brunson as well as locally employed staff, journalists, and civil servants,” Democratic Senator Robert Menendez said.

The Turkish lira sank after Trump’s threat, compounding concerns about raising inflation and Erdogan’s stewardship of the economy.