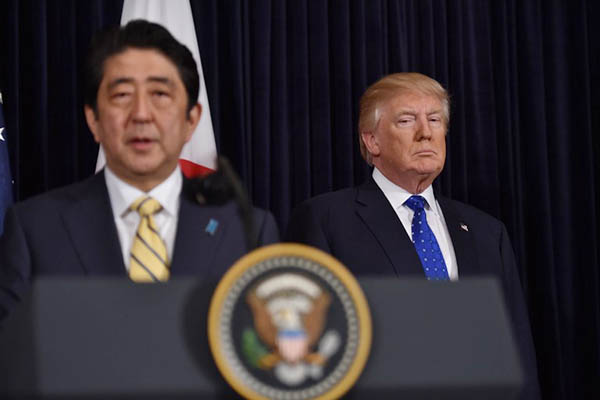 Social media posts of Donald Trump and Shinzo Abe huddling with aides in a public dining room after North Korea’s missile test raised questions on Monday about his administration’s handling of sensitive information.

The conversation—which would ordinarily take place behind closed doors and be classified—was captured on camera from close range by a member of Trump’s Mar-a-Lago club in Palm Beach, Florida on Saturday.

Facebook user Richard DeAgazio posted pictures of Trump huddling with aides and Abe, and taking calls. One caption of the now removed posts read: “The President receiving the news about the Missile incident from North Korea on Japan with the Prime Minister sitting next to him.”

DeAgazio later wrote: “The Prime Minister Abe of Japan huddles with his staff and the President is on the phone with Washington D.C. The two world leaders then conferred and then went into another room for hastily arranged press conference. Wow … the center of the action!!!”

North Korea launched a new ballistic missile on Sunday, as it edges ever-closer to marrying nuclear and missile technology that could deliver a devastating payload to the continental United States.

When the president is away from the White House, many crisis conversations take place in a Sensitive Compartmented Information Facility—or SCIF. The facilities are normally out-of-bounds for individuals without security clearance and common digital devises such as unsecured mobile phones.

The White House said that Trump was briefed in such a room “prior to dinner” and that no sensitive information was shared at the table. “There is no one in that picture around him or whatever that isn’t part of the U.S. delegation or the Japanese delegation, they were reviewing the logistics for the press conference,” said White House spokesman Sean Spicer. “The president was subsequently briefed again in a classified setting, after the dinner, before they went out and spoke.”

But Democrats were fuming, and quick to recall Trump’s criticism of 2016 election rival Hillary Clinton’s use of a private email server. “There’s no excuse for letting an international crisis play out in front of a bunch of country club members like dinner theater,” said the Democratic leader in the House of Representatives, Nancy Pelosi.