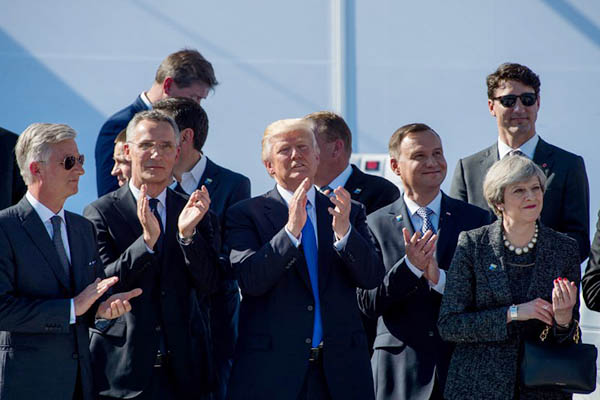 G7 leaders meet on Friday determined to put on a display of united resolve in the fight against jihadist terrorism, despite deep divisions on trade and global warming.

The two-day summit in Sicily’s ancient hilltop resort of Taormina kicks off four days after children were among 22 people killed in a concert bomb attack in Manchester. British Prime Minister Theresa May will lead a discussion on terrorism in one of Friday’s working sessions and is expected to issue a call for G7 countries to put more pressure on Internet companies to remove extremist content. “The fight is moving from the battlefield to the Internet,” a senior British official said ahead of the talks.

With May and Donald Trump among four new faces in the club of the world’s major democracies, the gathering in Italy is being billed as a key test of how serious the new U.S. administration is about implementing its radical policy agenda, particularly on climate change. Senior officials are preparing to work through the night of Friday-Saturday in a bid to bridge what appear to be irreconcilable differences over Trump’s declared intention of ditching the U.S. commitment to the landmark Paris according on curbing carbon emissions.

Officials acknowledge the summit, one of the shortest in the body’s history, is effectively about damage limitation against a backdrop of fears among U.S. partners that the Trump presidency, with its ‘America First’ rhetoric, could undermine the architecture of the post-World War II world.

Summit host Paolo Gentiloni, a caretaker Italian prime minister also making his G7 debut, acknowledged as much on the eve of the meeting. “It won’t be an easy discussion,” he said. “The Italian presidency will try to ensure it is a useful one, capable of bringing the different positions closer together.”

The build-up to the summit has seen even the terrorism issue, normally a unifying subject, sow division with Britain enraged that intelligence it shared with the United States in relation to the Manchester attack, including pictures of the bomb, was leaked to the New York Times and other U.S. media.

Seeking to defuse the row, Trump pledged on Thursday to prosecute those responsible for the leaks and described the relationship with Britain as “cherished.” For Trump, who touched down at a U.S. military airbase near the summit venue late Thursday, the talks will be the final leg of his first presidential foray overseas.

The grueling weeklong trip has temporarily diverted attention from domestic concerns focused on alleged campaign collusion with Russia. It has also enabled Trump to position himself as a more statesmanlike figure and, notably after his meeting with Pope Francis, as a man of peace—stances which European officials hope will edge him towards compromise with partners across a broad range of issues.

The other new face is France’s youthful president, Emmanuel Macron, who has vowed to defend the Paris climate change deal agreed in 2015. “On the climate question it might be important to have the whole night to reach a consensus,” a German government source said. “Europe has a common position on that, but we have to get the whole G7 together.”

The effort to keep Trump onboard will focus on convincing his team that developing renewable energy forms and technology to facilitate cleaner fossil fuels can be drivers of the job-creating growth that he says is his priority. “If we do it right climate protection and growth go hand in hand—and then it is not really important if it is a man-made problem or not,” said the German source.

Trump’s economic adviser Gary Cohn said Friday U.S. compliance with its Paris commitments would be “crippling” to economic growth, but added the president was “interested to hear what the G7 leaders have to say about climate.”

On the major security questions due to be addressed—Syria, Libya and North Korea—there is broad agreement among the G7 countries, although the importance of each varies.

Japan’s Prime Minister Shinzo Abe will use the summit to underscore the danger posed by the unpredictable regime in North Korea following its recent series of missile tests. “The issue of North Korea is a grave threat not only to East Asia but also to the world,” Abe told reporters before leaving Tokyo, urging the G7 to act “resolutely.”