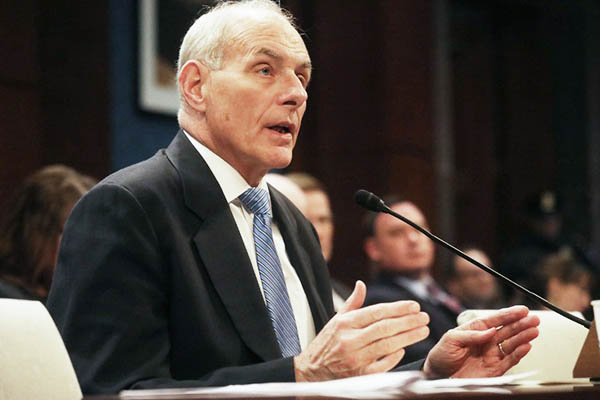 Outgoing White House chief John Kelly said in an interview published on Sunday that he had “nothing but compassion” for undocumented migrants crossing into the U.S., and undercut President Donald Trump’s claims to be building a “wall” at the Mexico border.

As a partial government shutdown entered a ninth day due to an impasse over Trump’s demands for funding the U.S.-Mexico border barrier, the president’s chief of staff told the Los Angeles Times: “To be honest, it’s not a wall.”

“The president still says ‘wall.’ Oftentimes frankly he’ll say ‘barrier’ or ‘fencing,’ now he’s tended toward steel slats,” Kelly said. “But we left a solid concrete wall early on in the administration, when we asked people what they needed and where they needed it,” he added.

Building a solid “wall” along the 2,000-mile U.S.-Mexico frontier was a central plank of Trump’s 2016 election campaign, and he has tweeted about it almost 100 times this year alone. “Either we build [finish] the Wall or we close the Border,” Trump—who has adopted the 2020 re-election mantra “promises made, promises kept”—posted as recently as Friday.

A former Marine general who led the military command responsible for Latin America, Kelly was Trump’s Homeland Security secretary before becoming White House chief of staff in July last year. His relationship with the president reportedly deteriorated, however, and he is to be replaced at the end of the year by Mick Mulvaney, the current budget director.

“Illegal immigrants, overwhelmingly, are not bad people,” Kelly told the LA Times, adding that many had been manipulated by traffickers. “I have nothing but compassion for them, the young kids.”

The remarks were in sharp contrast to the rhetoric of the president who regularly appeals to his overwhelmingly white political base by taking a hard line on immigration. Trump has spoken of an “invasion” of migrants and complained of “many gang members and some very bad people” among a thousands-strong caravan of immigrants that traveled to the U.S. in October.

Migrants from Central America say they want to reach the U.S. to escape poverty and gang violence.

Trump has threatened to end aid to Guatemala, Honduras and El Salvador, despite a State Department announcement on Dec. 18 that the U.S. was ready to offer $4.5 billion in investment in Central America and southern Mexico, and that the administration was requesting an additional $180 million in assistance to the region.

On Saturday Trump blamed opposition Democrats “and their pathetic immigration policies” for the deaths of two Guatemalan children who crossed the border illegally with relatives who were taken into custody by U.S. Border Patrol.

In a departure from the stance taken by his boss, Kelly said the way to halt illegal immigration was to “stop U.S. demand for drugs, and expand economic opportunity” in Central America.

Kevin McAleenan, the commissioner of U.S. Customs and Border Protection, said on ABC’s This Week that investment in Central America was one element of a “multi-faceted problem” that also requires funding border security. He called for a “sober-minded non-partisan look at our immigration laws” as part of the solution to an upsurge in family and child arrivals. “We’ve asked for about 1,000 miles of wall… And what we’re talking about is not just a dumb barrier,” McAleenan said. “We’re talking about censors, cameras, lighting, access roads for our agents, a system that helps us secure that area of the border.”

The Democrats are refusing to provide billions for Trump’s border wall project and the president insists he will not fully fund the government unless he gets the money. As long as the debate holds up approval of a wider spending bill, about 800,000 federal employees are not getting salaries and non-essential parts of the government are unable to function.

Kellyanne Conway, a close Trump adviser, said on Fox News Sunday that whether the border barrier was a “wall” or not was “a silly semantic argument,” adding that the president had already compromised, since he had originally asked for $25 billion.

Mulvaney told Fox last week that the administration had shown movement on the latest $5 billion demand for border security. “We actually came off of our $5 billion slightly,” he said.

Democratic Congressman Hakeem Jeffries agreed on ABC’s This Week that immigration reform and enhanced border security were needed. “At its core, our responsibility in government is to manage public money. We can either manage it efficiently or we can waste taxpayer dollars,” he said. “And what Donald Trump and the Republicans want to do is waste $5 billion in taxpayer money on an ineffective medieval border wall that is a fifth-century solution to a 21st century problem.”