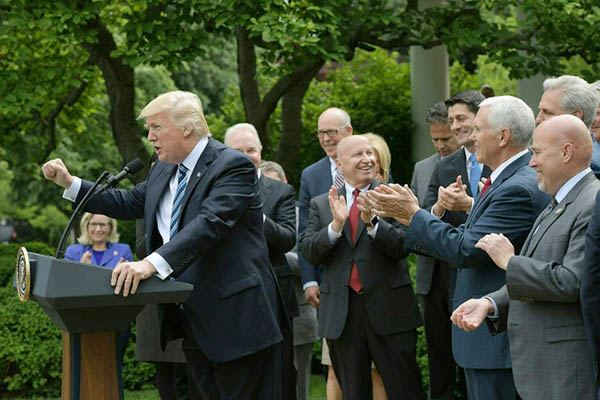 New bill, which stands to impact healthcare for millions, has yet to pass Senate

U.S. President Donald Trump extracted a much-needed victory from Congress on Thursday as Republicans narrowly pushed a bill through the House of Representatives repealing the landmark health reforms of his predecessor.

The vote of 217-213 could hardly have been closer in the Republican-controlled chamber, highlighting the concerns of many in Trump’s party who fear the bill could strip millions of Americans of their coverage and send costs skyrocketing. Although the vote brings Republicans a step closer to fulfilling the singular campaign pledge that has united the party in recent years—and helped Trump win the White House—the bill will almost certainly need substantial revisions if it is to pass the Senate.

Trump nevertheless proclaimed victory over the Affordable Care Act, expressing optimism that the controversial new measure will ultimately become law. “We’re going to get this passed through the Senate. I feel so confident,” he declared in the White House Rose Garden, surrounded by key Republican lawmakers including House Speaker Paul Ryan, who shepherded the bill to passage.

Hours later, in New York for a meeting with Australian Prime Minister Malcolm Turnbull, Trump was still boasting of his party’s “big day.”

“We passed it by a few votes,” he confided to Turnbull.

Republicans including Trump have campaigned relentlessly on the pledge to dismantle the 2010 reforms. “This bill delivers on the promises that we have made to the American people,” Ryan told cheering Republicans, while Democrats shouted their disapproval. “A lot of us have been waiting seven years to cast this vote” to kill off Obamacare, he added. “End this failed experiment.”

An earlier version of the Republican plan collapsed in March when party moderates and conservatives refused to get on board—dealing Trump one of his most stinging setbacks since he took office. In extraordinary scenes on the House floor on Thursday, lawmakers hurled jeers across the center aisle, taunting each another about the controversial legislation.

House Minority Leader Nancy Pelosi painted a bleak picture of looming health care chaos, saying the vote could cost Republicans their majority in upcoming elections next year. “You vote for this bill, you have walked the plank, from moderate to radical,” she said. “You will glow in the dark” from the vote’s toxic effect.

One signal that health care will remain a political lightning rod came from Trump’s 2016 presidential rival Hillary Clinton, who blasted the Republicans’ “shameful failure of policy & morality.” In a tweet, she urged Democrats to “fight back on behalf of the millions of families that will be hurt by their actions.”

Despite Trump’s confidence, the bill faces an uphill battle in the Senate, where Republicans hold a slender 52-48 majority. Two Senate Republicans have already stated their opposition to the current plan. Others have expressed concern because it rolls back the expansion of Medicaid, the public insurance program for the poor and disabled.

The rollback could deny Medicaid coverage to millions of working poor. “The current bill falls short,” Senate Republican Dean Heller said. “We need assurances that people with pre-existing conditions will be protected.”

Several Democrats—who warn that the measure cuts taxes by some $800 billion over a decade with most savings going to the wealthy—insisted the bill was dead on arrival in the Senate. Republican Lamar Alexander, chairman of the Senate Health Committee, signaled that his chamber will draft its own legislation, “but will take the time to get it right.”

House leaders won over enough skeptical Republicans with an amendment that adds $8 billion over five years to help cover insurance costs for people with pre-existing conditions.

Experts and health groups ridiculed the amendment, saying it falls woefully short of the hundreds of billions of dollars likely needed to control health costs for the sick under the new bill.

An earlier budget office estimate predicted that the Republican bill would leave 24 million fewer people insured by 2026 than under current law. Critics blasted House Republicans for holding Thursday’s vote before the publication of a new estimate, although one is expected before the Senate considers the bill.