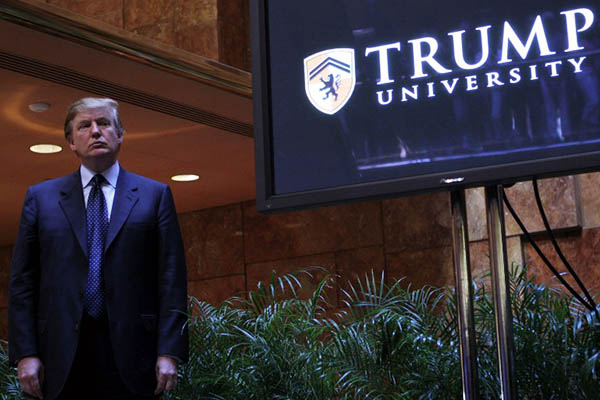 U.S. president-elect Donald Trump on Friday agreed to pay $25 million to settle lawsuits accusing his now-defunct Trump University of fraud, sparing him the embarrassment of further legal wrangling as he prepares to enter the White House.

A trio of suits brought by former students alleged that the training program—which was not an accredited college or university, but was in operation from 2005 to 2011—fleeced students by tricking them with aggressive marketing. Students paid as much as $35,000 to enroll, wrongly believing they would make it big in real estate after being taught by the Manhattan mogul’s hand-picked experts, said the suits brought in New York and California.

Trump’s lawyers had countered for years that many students had given the program a thumbs-up and those who failed to succeed had only themselves to blame. But, with the president-elect apparently seeking to put the thorny matter to rest as he builds his cabinet, a deal was reached.

“Today’s $25 million settlement agreement is a stunning reversal by Donald Trump and a major victory for the over 6,000 victims of his fraudulent university,” New York state attorney general Eric Schneiderman said. “I am pleased that under the terms of this settlement, every victim will receive restitution and that Donald Trump will pay up to $1 million in penalties to the State of New York for violating state education laws.”

A spokesperson for Schneiderman’s office said the settlement covers all three class-action lawsuits against Trump University: two in California dating to 2010 and one in New York filed in 2013.

Robert Guillo, a 76-year-old New Yorker who spent nearly $40,000 on tuition alongside his son, had previously told AFP that the program was an “absolute scam.”

The agreement came just before a hearing in a San Diego federal court was about to begin to decide on a request by Trump to delay the trial. Jason Forge, one of the lead attorneys for the plaintiffs in the San Diego cases, hailed the settlement.

“This case has been unprecedented in so many ways,” he told AFP. “It’s only fitting that it end with an unprecedented recovery for so many people.” He added that the settlement proves the students had a valid case.

“This man fights for what he believes in and I respect that,” Forge said, referring to Trump. “So this settlement means he believed that the students deserved a real recovery.” He said $21 million of the settlement would go to reimburse the Trump University plaintiffs in San Diego. The remainder would go to the attorney general in New York to reimburse plaintiffs in that case.

Forge added that the aggrieved former students could expect their money within three to four months.

Lead Trump attorney Daniel Petrocelli said his client had put aside his personal feelings to settle the matter. “President-elect Trump is pleased to put this case behind him,” Petrocelli told reporters in San Diego. “We think it’s a victory for everybody.”

Trump agreed to the settlement without admitting any fault or liability, Petrocelli added.

A Trump Organization spokesman insisted that had the case gone to trial, Trump would have won. “While we have no doubt that Trump University would have prevailed at trial based on the merits of this case, resolution of these matters allows president-elect Trump to devote his full attention to the important issues facing our great nation,” the spokesman said in a statement read on CNN.

In February, Trump tweeted that the program had a 98 percent approval rating and that he would not settle out of principle. Trump also attacked the U.S.-born federal judge handling the case in San Diego, Gonzalo Curiel, saying he could not be impartial because of his Mexican roots—comments that outraged many.

During the bitter presidential campaign, Trump had pledged to build a wall on the U.S.-Mexico border and to expel millions of illegal immigrants—comments, he claimed, had turned the judge against him.