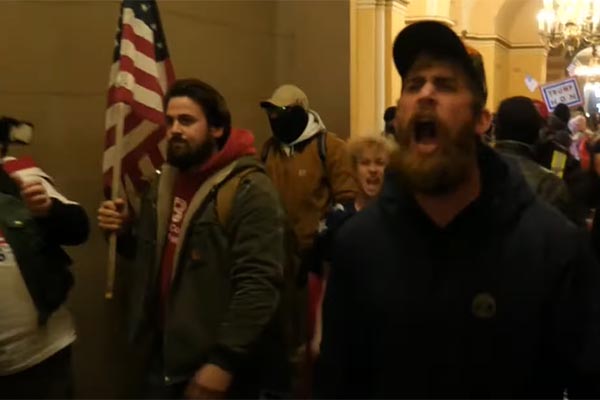 The violent insurrection was in response to a joint session of Congress to certify President-elect Joe Biden’s Electoral College win. Metropolitan Police Department Chief Robert J. Contee, in a late night press conference, said that 47 of the 52 arrests were linked to violations of a 6 p.m. curfew in the U.S. capital. He said several others had been arrested on charges related to carrying unlicensed or prohibited firearms.

According to Contee, four people have died thus far—one of them shot and killed by a Capitol Police office and the remaining three because of medical emergencies. He also said that police had recovered two pipe bombs from the headquarters of the Republican and Democratic national committees, as well as a cooler from a vehicle on U.S. Capitol grounds that contained Molotov cocktails.

The press conference occurred after hours of chaos during which the rioters forced their way past security barricades, broke windows and scaled walls to enter the Capitol building, where many scuffled with police officers. Some even besieged the House of Representatives chamber while lawmakers were inside, forcing suspension of the certification debate. Security officers piled furniture against the chamber’s door and drew their pistols before helping lawmakers and others escape.

By late Wednesday night, both houses of Congress had resumed their debate on the certification of Biden’s Electoral College win.

The assault on the Capitol was the culmination of months of divisive and escalating rhetoric around the Nov. 3 presidential election, with Trump urging his supporters to help him overturn his “rigged” loss. In the immediate aftermath of the riot, the U.S. president came under intense criticism from some prominent Republicans in Congress, who blamed him for the day’s violence. “There is no question that the president formed the mob, the president incited the mob, the president addressed the mob. He lit the flame,” House Republican Conference Chairwoman Liz Cheney said on Twitter. Republican Senator Tom Cotton, a leading conservative from Arkansas, also called on Trump to accept his election loss and “quit misleading the American people and repudiate mob violence.”

While the rioters were roaming the capitol, Trump posted a video to Twitter repeating his false claims about election fraud and urging the protesters to leave. “You have to go home now, we have to have peace,” he said, adding: “We love you. You’re very special.”

Twitter later restricted users from retweeting Trump’s video, and Facebook took it down entirely, citing the risk of violence. Twitter also announced it had suspended the U.S. president’s account for 12 hours over “repeated and severe violations” of the social media platform’s “civic integrity” rules and threatened permanent removal.

The dramatic scenes stunned world leaders, with calls for calm and an acceptance of the presidential election results. U.N. Secretary-General Antonio Guterres was “saddened” by the events at the U.S. Capitol, according to his spokesman, who said it was “important” during such times for leaders to impress upon their supporters to refrain from violence.

China, meanwhile, issued an advisory on its website warning its citizens to avoid crowded places in Washington, D.C. and strengthen safety precautions. Indian Prime Minister Narendra Modi, in a tweet, said he was “distressed” by the news of the riots. “Orderly and peaceful transfer of power must continue. The democratic process cannot be allowed to be subverted through unlawful protests,” he said.

British Prime Minister Boris Johnson, in a tweet, called the mob scenes a “disgrace,” adding that it was “vital” that there should be a peaceful and orderly transfer of power in the U.S. Similar calls for restraint and continuity of the democratic process were issued by Japan, France, Germany, Russia, Spain, Ireland, Turkey, the European Union, Canada, New Zealand, Venezuela, Australia, and Sweden.