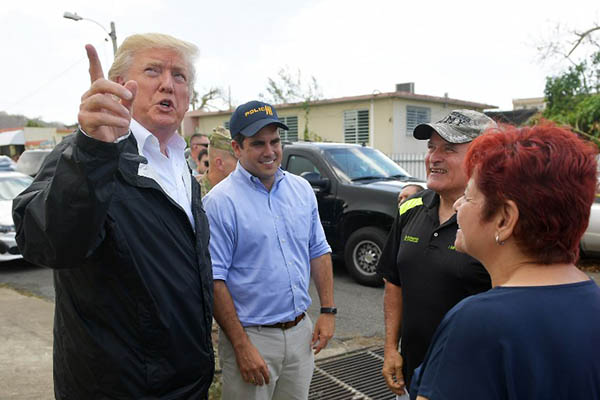 U.S. President Donald Trump shook hands with storm survivors in Puerto Rico and told them to be “proud” the island did not lose more lives to Hurricane Maria, on a trip designed to quiet criticism of his administration’s response to the disaster.

The U.S. president, alongside First Lady Melania Trump, visited the middle class suburb of Guaynabo, walking among trees and signs felled two weeks ago by Maria’s jet-blast winds. Trump asked residents about their homes, posed for photos and stopped into a church along the way to shoot rolls of paper towel basketball-style into a crowd snapping pictures on their cellphones.

Nearly two weeks after Maria thrashed through the U.S. territory, much of the island remains short of food and without access to power or drinking water.

The administration’s critics said the early response was not fast enough or on a scale that could help the island’s 3.4 million American citizens. A fortnight later, seven percent of the island has electricity, more than 9,000 people are living in shelters, and just 40 percent of telecommunications are back up. Thousands of homes—most of them made of wood—have been destroyed, according to the Federal Emergency Management Agency.

After touching down at Muniz Air National Guard Base, beginning his five hour trip, Trump rallied disaster management workers telling them they “can be very proud” of their response. But many of the president’s comments appeared to be aimed at quieting his own critics. He invited officials to say “nice things” about the response and contrasted it with previous storms.

“We saved a lot of lives,” Trump said, comparing the outcome favorably to that of Hurricane Katrina, which ravaged New Orleans in 2005. “If you look at a real catastrophe like Katrina and you look at the tremendous hundreds and hundreds of people that died and what happened here with a storm that was just totally overbearing.”

“No one has ever seen anything like that. What is your death count?” he asked. At the time, the number of dead stood at 16. “I hate to tell you Puerto Rico but you threw our budget a little out of whack, but that’s fine,” Trump said.

He later described the response as “nothing short of a miracle.”

Later, Governor Ricardo Rossello announced the death toll had more than doubled. “This morning we were at 16; now 34 have been identified,” he told a briefing. Rossello said the deaths included drownings, injuries from homes collapsing, and people on respirators who died because there was no power to run the equipment.

Before traveling to the island, Trump had feuded with local officials over the pace of the relief effort, berating San Juan’s mayor Carmen Yulin Cruz and suggesting Puerto Ricans were “ingrates” who “want everything to be done for them.” Luckily for the White House, few Puerto Ricans have had the time or—quite literally the energy—to read or hear of the president’s barbed remarks.

There has been some anger in Puerto Rico that Trump chose to visit Guaynabo—a relatively affluent area, where most homes are of weather-proof concrete—unlike in the worst-hit areas of the island. But the president’s visit was carefully choreographed to avoid any embarrassing protests.

Along the route of his motorcade a single sign declared him a “bad hombre.” A dozen protestors could be seen in front of San Juan’s Convention Center, where the government established their operations.

Later Trump surveyed the damage from the air before landing on the USS Kearsarge to greet Navy and Marine Corps servicemen and women.

Trump has been pilloried by political opponents for moving more slowly to help Puerto Rico than he did Texas or Florida.

“I don’t remember the president telling Texas that they threw our budget out of whack after Harvey, or Florida after Irma,” said top Senate democrat Chuck Schumer. “That’s what we do in America. When one part of the country has trouble, the rest of the country reaches out to them and says ‘We’re going to help you.’”