Trump, the Arabs and Pakistan 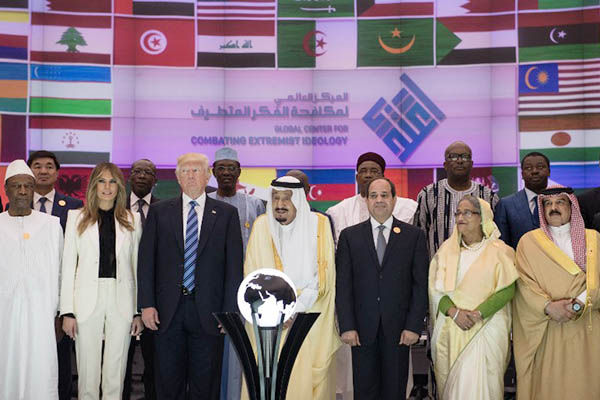 Despite outrage on media, P.M. Nawaz Sharif made the right choice in not publicly rebuking Trump at the Arab-Islamic-American Summit

U.S. President Trump at the Arab-Islamic-American Summit in Saudi Arabia rubbished Iran, pleasing the Gulf Arabs, before traveling to Jerusalem in Israel and then visiting the Western Wall that no sitting president of the United States has ever done before. Israeli prime minister Benjamin Netanyahu appeared overwhelmed by how America, under Trump, appeared to manage a volte-face on Iran; and didn’t appear to offend the Arab neighbors of Israel by breaking taboos on America’s Israel policy.

Trump is known to be mercurial. Yet the Arabs whose visas he sought to abolish not too long ago appeared not to mind as they sat in front him, listening to his condemnations of Iran. Netanyahu too chose to forget how Trump had recently leaned too heavily in favor of the Palestinian Authority’s Mahmoud Abbas. What counted with him was an end to former President Obama’s policy on Iran, which consisted of making a nuclear deal with Tehran along with the five permanent members of the U.N. Security Council plus Germany. Netanyahu had taken on Obama and gone to the U.S. Congress to lobby against him for allowing Iran to become the big power of the Middle East after the lifting of sanctions. He was scared of Hezbollah in Lebanon, funded by Tehran, and had lived to see Iranian irregulars fighting in Iraq and Syria, too close to Israel for comfort.

In Pakistan, Prime Minister Nawaz Sharif was condemned on the media for not rising at the summit and rebuking Trump for the way America had behaved in the Middle East and South Asia, siding with India and being unmoved by what New Delhi is doing to the struggling Kashmiris. He was the odd man out, his erstwhile army chief leading the Arab hordes, and India moving ever closer to Riyadh and Tel Aviv at the same time. He knew Pakistan couldn’t afford to rock the Islamic-Arab boat and take on half of humanity for the sheer luxury of insulting Trump and siding with self-isolated Iran.

This qualifies as an “article” ?

Hard to understand why pakistanis continue to wash their dirty laundry in public foreign relations are very important see indian media another happy moment just because nuckle head like saleem bokhari created an issue by releasing his media reaction and india Afghanistan iran all are catching on our short comings and dirty politics of PTI . I don’t think imran khan can ever become a statesman not in his power it will be another disaster if this person ever became PM of pakistan or PTI rule this ocuntry .. utter shame