Home Latest News Trump to Chicago: Fix ‘Carnage’ or the Feds Are Coming

Trump to Chicago: Fix ‘Carnage’ or the Feds Are Coming 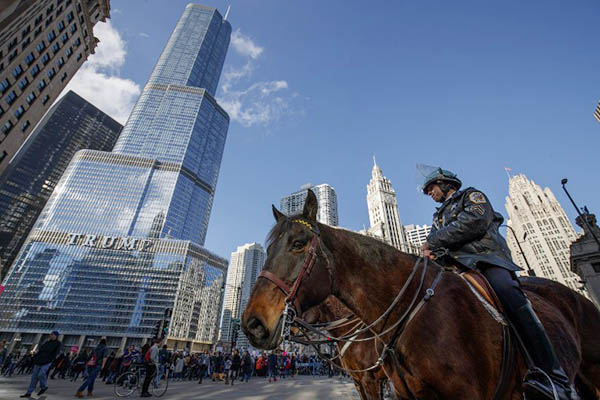 Citing soaring crime rate, U.S. president tweets he is ready to enact federal action to rein it in.

President Donald Trump threatened late Tuesday to send in the “feds” if America’s third-largest city of Chicago failed to bring its rampant crime rate under control.

The Republican, who made law and order a key issue in his White House campaign, cited the city’s latest shooting and homicide statistics as reported by the Chicago Tribune.

The city, former president Barack Obama’s adopted hometown, has the worst violent crime statistics of any major U.S. metropolis. It wasn’t clear if Trump meant he would federalize the local police force, send in federal reinforcements, or some other action.

The Chicago Police Department said in a statement that it was “more than willing to work” with federal agencies such as the FBI, the Drug Enforcement Agency (DEA) and the Bureau of Alcohol, Tobacco and Firearms (ATF) to “boost federal prosecution rates for gun crimes in Chicago.”

On Jan. 2 Trump tweeted that Mayor Rahm Emanuel—a Democrat who was Obama’s chief of staff during his first term—should ask for federal help if he was unable to stop the skyrocketing murder rate.

According to Chicago police statistics, 2016 was the city’s deadliest year in nearly two decades, with 762 murders and 3,550 shooting incidents.