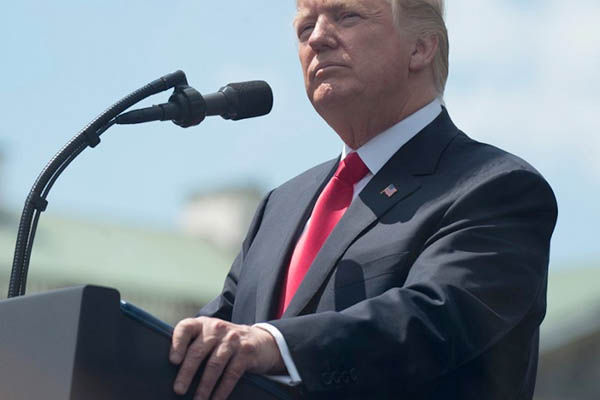 A senior White House adviser on trade said on Thursday that President Donald Trump would soon consider fresh punitive measures against Beijing over its “theft” of U.S. intellectual property.

With tariffs recently announced on major imports including steel and aluminum, trade war fears have sent markets tumbling and left U.S. trading partners torn between conciliation and pushback in response. “In the coming weeks, President Trump is going to have on his desk some recommendations,” Peter Navarro said on CNBC. “This will be one of the many steps the president is going to courageously take in order to address unfair trade practices.”

Chinese officials have warned they are likely to retaliate in kind. Speaking at a regular briefing on Thursday, foreign ministry spokesman Lu Kang said: “History has proven that a trade war is in no one’s interest.”

“If an undesirable situation arises, China has the intention of safeguarding its legitimate rights,” he said.

The United States has long accused Beijing of forcing U.S. companies to turn over proprietary commercial information and intellectual property as a condition of operating in China. The office of the U.S. Trade Representative launched an inquiry into the matter in August and is due to submit its findings to the White House soon.

Trump himself has for decades held nationalistic views on trade and opposed globalization. But the new tariffs have drawn rebukes from top lawmakers in Trump’s own Republican Party as well as fierce opposition from industry groups, which fear rising consumer prices and raw materials costs as well as diminished access to export markets.

The Harvard-trained Navarro rose to prominence by publishing anti-Beijing diatribes on trade and is an outlier among more mainstream economists, who believe excessive tariffs will be self-defeating. “I don’t think … anybody on Wall Street will oppose cracking down on China’s theft of our intellectual property,” Navarro said on Thursday.

The United States on Wednesday launched a trade dispute with India at the World Trade Organization over export subsidies.

Officials say the White House’s actions on intellectual property could include a raft of retaliatory tariffs on billions of dollars of tech and telecommunications imports from China. Documents seen Wednesday by AFP also indicated the United States has proposed WTO reforms that would punish member countries which fail to abide by certain rules—a move seen as aimed squarely at Beijing, which the Trump administration says is not a market economy and should not have been admitted the WTO.

Navarro added on Thursday that fears of tit-for-tat countermeasures and subsequent harm to growth were overblown. “We’re going to work with our allies and trading partners to make things better for everybody,” Navarro said. “I think it’ll be fine if you just look at the chess board because nobody really has any incentive to pick a fight with us. They’re getting too good a deal from us.”