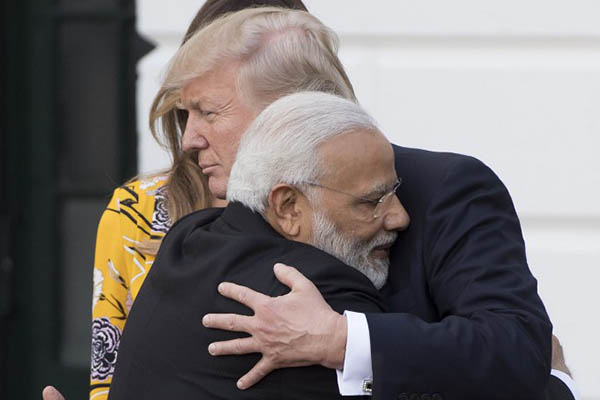 White House says U.S. president will joint Indian leader in a symbolic show of bond between their two nations

President Donald Trump will join Prime Minister Narendra Modi at a massive gathering of Indian-Americans in Houston, the White House said on Sunday, in a symbolic show of the bond between the two leaders and countries.

The Sept. 22 rally—dubbed, with a touch of Texan twang, “Howdy, Modi!”—will mark a rare joint appearance between a U.S. president and a foreign leader before an ethnic community, and be the pair’s third meeting this year.

Organizers say that more than 50,000 people have registered for the event, which will take place inside the NRG Stadium of the Houston Texans football team. The gathering is “a great opportunity to emphasize the strong ties between the people of the United States and India, to reaffirm the strategic partnership between the world’s oldest and largest democracies and to discuss ways to deepen their energy and trade relationship,” the White House said.

The White House said Trump would travel the same day to Ohio to showcase an Australian-owned factory alongside Prime Minister Scott Morrison, who will be on a state visit.

The two joint appearances amount to a daylong attempt to nurture relationships with foreign leaders by Trump, whose brash style and outspoken remarks have frequently unnerved allies. The rally with Modi indicates that the two countries have turned the page on an incident in July when Trump baffled India by saying, in a meeting with Pakistani Prime Minister Imran Khan, that Modi had sought mediation on Kashmir, a flashpoint for conflict between the nuclear-armed powers.

India has for decades rejected any outside role in Kashmir. Last month, Delhi revoked India-held Kashmir’s autonomous status and snapped communications for much of the Muslim-majority region. India’s actions drew criticism from the U.N. human rights chief and rights groups, with Pakistan urging pressure on India, although Trump has voiced support for Modi’s actions.

Trump and Modi have frequently drawn comparisons to each other, with the two right-wing leaders elected on vows to promote the identity of the majority community. But organizers hope to keep the Sept. 22 rally non-partisan, with a cultural performance planned and invited speakers including Steny Hoyer, the number-two Democrat in the House of Representatives.

The joint event shows “the personal chemistry and friendship” between Trump and Modi, Harsh Vardhan Shringla, the Indian ambassador to the United States, told AFP. “These are two leaders who are used to thinking outside of the box,” he said, describing the joint appearance as “unconventional and unique.”

“The event will also reflect the strong bipartisan support there has been for U.S.-India relations,” he said, describing Indian-Americans as an “organic bridge” between the world’s two largest democracies.

Shringla said that Modi would also meet in Houston with energy companies before heading to New York for the U.N. General Assembly.

Some four million Americans trace their origins to India and the community is among the most educated and prosperous in the United States. The average Indian-American household earned some $100,000 in 2015, nearly double the U.S. average, according to the Pew Research Center. But while Modi will likely enjoy a rock-star reception in Houston, Indian-Americans are not expected to be a major base for Trump as he gears up to seek another term in next year’s election.

Some 84 percent of Indian-Americans voted in 2016 for his rival Hillary Clinton, making them among the most Democratic-leaning ethnic groups, according to polling by the Asian American Legal Defense and Education Fund. During the 2016 campaign, Trump took part in a rally in New Jersey at which he declared, awkwardly, “I love Hindu.”