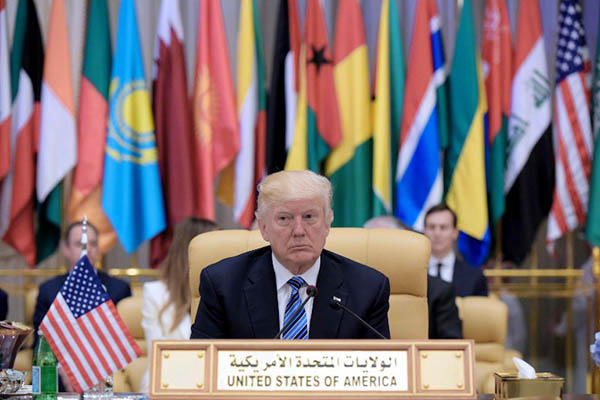 U.S. President Donald Trump urged Gulf unity on Tuesday in remarks released just hours after he appeared to back Saudi Arabia and its regional allies’ decision to sever ties with Qatar.

In an abrupt and sweeping move, Saudi Arabia, Egypt, the United Arab Emirates and Bahrain announced on Monday they were cutting diplomatic relations and closing air, sea and land links with Qatar. Triggering the Arab world’s biggest crisis in years, they accused the tiny Gulf state of harboring extremist groups and suggested Qatar supported the agenda of Iran.

Trump waded into the row in a series of early morning tweets that signaled support for the effort to isolate Qatar, despite the country being home to the largest American airbase in the Middle East. “So good to see the Saudi Arabia visit with the King and 50 countries already paying off,” he tweeted in reference to his trip to Riyadh last month. “They said they would take a hard line on funding… extremism, and all reference was pointing to Qatar. Perhaps this will be the beginning of the end to the horror of terrorism!”

The broadside came as Kuwait’s ruler flew to Saudi Arabia to try to resolve the split. A CNN report then cited Qatar’s foreign minister Sheikh Mohammed bin Abdulrahman Al-Thani as saying FBI experts had concluded that Russian hackers had a hand in the furor. The broadcaster said U.S. intelligence officials believe the hackers planted a false story on Qatar’s state news agency that may have prompted the Saudi Arabia-led sanctions on Qatar.

Speaking earlier to the BBC, Thani responded to Trump’s tweets, denying any funding “of terrorism” and saying there was no “evidence that the Qatar government is supporting radical Islamists.”

Energy-rich Qatar has long had strained ties with its neighbors, but the move by Saudi Arabia and its supporters raised fears of more volatility in the region.

Trump spoke by telephone with Saudi Arabia’s ruler King Salman later Tuesday in an exchange of notably different tone from the U.S. president’s earlier remarks on Twitter. “The president underscored that a united Gulf Cooperation Council is critical to defeating terrorism and promoting regional stability,” the White House said in a statement regarding the call. “The two leaders discussed the critical goals of preventing the financing of terrorist organizations and eliminating the promotion of extremism by any nation in the region.”

Support for Qatar came from Turkish President Recep Tayyip Erdogan, who criticized the sanctions and vowed to maintain and develop ties with Doha. “Efforts to isolate Qatar… will not solve any problem,” he said, praising Doha’s “cool-headedness” and “constructive approach.” But the Saudi-led action was already having tangible effects, with dozens of flights canceled, Qatari planes barred from regional airspace, and panic buying in Doha amid fears of food shortages.

Another Arab nation, Jordan, said after studying the causes of the crisis with Qatar it was downgrading its diplomatic representation and withdrawing licenses for the Amman bureau of the Doha-based TV news channel Al-Jazeera.

Qatar has said it is open to talks, but Saudi Foreign Minister Adel al-Jubeir said the gulf state must “change their policies” and stop supporting “extremist groups.”

French President Emmanuel Macron said he was ready to back “all initiatives to encourage calm.”

The crisis will have wide-ranging consequences, not just for Qatar and its citizens, but across the Middle East and for Western interests. Some 10,000 military personnel are stationed at the Al-Udeid airbase. As the forward headquarters of U.S. Central Command, it is seen as crucial in the U.S.-led campaign against the Islamic State group.

A Pentagon spokesman said the crisis has had “no impact on our operations in Qatar or with regards to airspace permission around it.”

The International Air Transport Association called on the countries that acted against Qatar to restore air links with the country, warning of major travel disruptions.

Qatar is also a major regional diplomatic player and international investor and is set to host the World Cup, football’s biggest tournament, in 2022. But Qatar has also long been accused by its Gulf neighbors and Egypt of supporting extremist groups.

In announcing it was cutting ties, Riyadh accused Doha of harboring “terrorist and sectarian groups that aim to destabilize the region including the Muslim Brotherhood, Daesh and Al Qaeda.”

Riyadh also accused Doha of supporting Iran-backed “terrorist activities” in eastern Saudi Arabia and in Shia-majority Bahrain. “The measures are unjustified and are based on false and baseless claims,” Qatar said in response to Monday’s announcement.

Gulf countries previously recalled their ambassadors from Qatar in 2014, ostensibly over its support for the Brotherhood, but Monday’s moves go much further. Saudi Arabia and its Gulf allies may have felt emboldened by Trump’s visit to Riyadh, which saw the new president clearly align U.S. interests with Riyadh and lash out at Iran.

Qatar has an independent streak that has often angered its neighbors, attracting criticism for supporting Islamist rebels in Syria, and in 2013, the Afghan Taliban opened a Doha office. Fellow Gulf states are also reported to have been angered by a huge ransom paid by Doha earlier this year to secure the release of a hunting party, which included members of the Qatari royal family, kidnapped in southern Iraq. The ransom, which Iraqi officials said was in the “hundreds of millions of dollars,” was believed to have been paid to militias with close ties to Tehran.