Trump Urges Unity in State of the Union Address 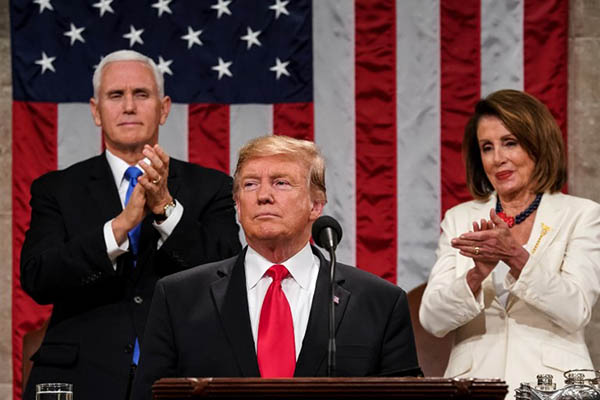 U.S. president tells Congress to ‘reject the politics of revenge, resistance, and retribution’

President Donald Trump urged Americans to come together on Tuesday in a State of the Union speech seeking to turn the page on two years of divisive turmoil and transform him into a bipartisan national leader. But opposition Democrats almost instantly rejected the overture, while Trump’s steadfast insistence on building U.S.-Mexico border walls promised new political strife in the near future.

At times joking, at times impassioned, Trump told Congress and a huge television audience that “we must reject the politics of revenge, resistance, and retribution—and embrace the boundless potential of cooperation, compromise, and the common good.”

On foreign policy, Trump reaffirmed his determination to get U.S. troops out of Afghanistan and Syria as quickly as possible. And he announced he would extend his trailblazing personal diplomacy with North Korea by meeting reclusive leader Kim Jong Un on Feb. 27-28 in Vietnam.

Trump touted what he hopes will remain his strongest card with voters—“the hottest economy anywhere in the world.” He also called for a bipartisan push to eradicate the AIDS epidemic in the United States in a decade. But the key aim in the speech, littered with soaring rhetoric and interrupted continuously by applause from the Republicans, was to announce a new, more inclusive presidential tone ahead of Trump’s 2020 reelection bid.

The problem is that in two years of his administration Trump has driven an already polarized country into bitter, even violent debate over almost every aspect of politics. The divide was stark from the moment Trump entered the House of Representatives chamber, with Republicans scrumming to shake his hands, but most Democrats keeping out of the way.

And the moment Trump swung onto his favorite topic of building a wall on the Mexican border to stop an “onslaught” of illegal immigrants, Democrats angrily shook their heads. A decision by Democrat women to wear white, in honor of the early 20th century suffragette movement, was seen as a visual rebuke of Trump.

After the speech, Senior House Democrat Steny Hoyer declared that Trump “leaned on falsehoods and fear to obscure the reality of a presidency lacking in leadership and harmful to America’s future.” The president’s single-minded drive—and failure—to get congressional funding for that wall is at the heart of the political dysfunction his speech claimed to be trying to resolve.

Democrats say that Trump’s warnings about illegal immigrant murderers amount to political fear-mongering and they refuse to authorize the money. The resulting standoff has turned what might have been a relatively minor funding debate into an existential test of political strength in the buildup to 2020.

In December, Trump took revenge on Congress by triggering a crippling five-week partial shutdown of government. Democratic House speaker Nancy Pelosi, who was seated behind Trump for the State of the Union, exacted her own reprisal by forcing the speech to be delayed by a week.

Things could soon escalate, with Trump threatening to renew the shutdown or declare a national emergency so that he can bypass Congress and give himself power to take military funds for his project. “I will get it built,” he said firmly, to cheers from Republicans and silence from Democrats.

Trump’s claims to foreign policy successes are not necessarily endorsed even in his own party. He repeated in the speech that he wants U.S. troops to pull out from long-running wars, such as Afghanistan and Syria as soon as possible. “Constructive” talks with the Taliban guerrillas have “accelerated,” he said in a notably upbeat assessment.

There were cheers but the withdrawal promises have been criticized by some in the security services and many Republicans, who fear a loss of American influence on the world stage.

Trump likewise gave an update on his plan for a second summit with reclusive North Korea’s Kim, whom he is trying to persuade to give up nuclear weapons. “As part of a bold new diplomacy, we continue our historic push for peace on the Korean peninsula.”

Closer to home, he dialed up the pressure on Venezuela’s leftist leader Nicolas Maduro, saying “we stand with the Venezuelan people in their noble quest for freedom.”

Opposition leader Juan Guaido’s envoy to Washington was among the top guests invited to attend the speech. Trump’s speech began by recalling U.S. triumphs in World War II and space exploration. It ended with an oratorical flourish, declaring “this is the time to reignite the American imagination. This is the time to search for the tallest summit and to set our sights on the brightest star.”

But it was clear that political foes in Washington were not persuaded. “It will take more than a speech to paper over President Trump’s consistent view that the only obligation he has is to his political base,” Democratic Senator Michael Bennet tweeted.

Lloyd Doggett, a Democrat congressman, said that Trump’s speechwriters could not change the reality of the current White House. “The centerpiece of this speech was fear about a phony border crisis. There’s no path forward to avoid more chaos,” he said. “It is less important how Trump reads a teleprompter one night of the year than the other 364 days of Twitter-fueled mayhem that threaten our union.”