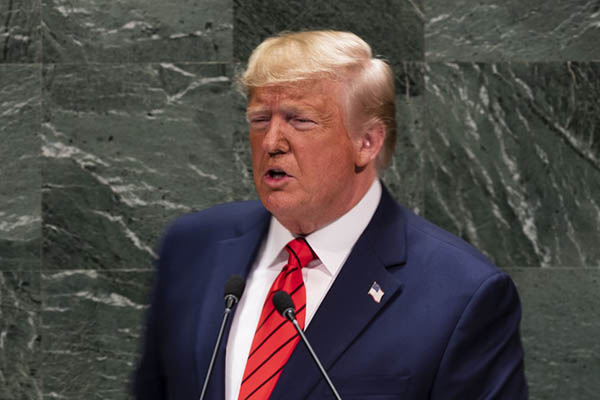 U.S. President Donald Trump on Tuesday threatened to intensify sanctions on Iran, despite European leaders’ hopes for a last-minute breakthrough at the United Nations to reduce tensions.

The leaders of France, Germany and Japan were all meeting separately with Trump and Iran’s Hassan Rouhani, fanning speculation that the pair—whose nations have been archenemies for four decades—could have a historic encounter in New York.

But in a speech to world leaders full of praise of unilateralism and criticism of China, Trump made clear he would not ease economic pressure on Iran—a condition set by Rouhani for any meeting.

“As long as Iran’s menacing behavior continues, sanctions will not be lifted. They will be tightened,” Trump told the General Assembly. He also denounced Iran for an attack earlier this month on Saudi Arabia’s oil infrastructure—a day after European powers agreed with U.S. findings that Iran was to blame.

“All nations have a duty to act. No responsible government should subsidize Iran’s bloodlust,” Trump said.

European powers, while criticizing Iran, want to salvage a 2015 accord under which Iran dramatically scaled back its nuclear program in exchange for unmet promises of sanctions relief. Trump last year pulled out of the agreement and imposed sanctions, sending tensions soaring with Iran, which in June also shot down an unmanned U.S. spy drone.

French President Emmanuel Macron, who directly pitched an Iran summit to Trump last month, said that the biggest risk was an “uncontrolled escalation” in the Gulf. He said he had an “extremely direct” 90-minute meeting with Rouhani on Monday evening in which he raised the attacks in Saudi Arabia, Iran’s archrival, which is leading a devastating offensive in Yemen.

“We need to get back around the table to have frank and demanding discussions on Iran’s nuclear, regional and ballistic activities but also to have a broader approach than sanctions,” Macron told reporters. “I’m hoping that we can make progress in the coming hours,” he said.

Despite Trump’s harsh words, he is fond of made-for-television surprises and met three times with North Korean strongman Kim Jong-Un.

Iran in recent days has sounded increasingly open to a meeting after initially ruling out any encounter with Trump. “We are not closing the door for conversation,” Foreign Minister Mohammad Javad Zarif said Monday at the United Nations. “What we’re saying is that you need to establish credibility,” he said, warning against simply giving “a photo opportunity” to Trump.

In a possible goodwill gesture, Iran also allowed a British-flagged oil tanker to set sail from its port of Bandar Abbas where it had been held for more than two months.

Trump—who on Monday snubbed a major summit on climate change called by the United Nations—also renewed his attack on international governance during his speech. “The future does not belong to globalists. The future belongs to patriots,” Trump said.

Backing Trump was Brazilian President Jair Bolsonaro, a far-right bugbear of environmentalists who rejected criticism of wildfires that have raged in the Amazon. “It is a fallacy to say that the Amazon is the heritage of humankind, and a misconception confirmed by scientists to say that our Amazon forests are the lungs of the world,” Bolsonaro said.

The Amazon serves as a vast carbon sink, sucking up emissions that have contributed to fast-rising temperatures, but rising deforestation to make way for agriculture risks aggravating climate change.