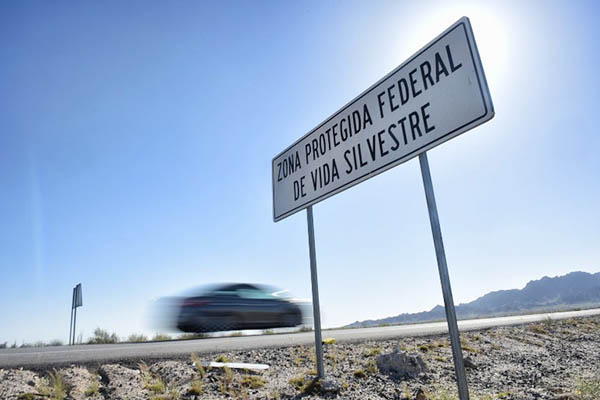 Many species that currently roam across border between Mexico, U.S. could face extinction if controversial wall built.

They are not “bad hombres,” as Donald Trump might say—or any kind of hombres at all. But like the human migrants targeted by the U.S. president, the jaguars, bighorn sheep and deer-like Sonoran pronghorns of northern Mexico have a lot to lose from his planned border wall.

Such species currently roam at will back and forth across the border of Mexico and the United States in reserves specially protected by both countries’ governments. Conservationists fear Trump’s vow to build a wall the length of the border to keep criminals out of the United States will doom the beasts to extinction; it would stop them getting where they need to go to feed and mate.

“Caution, fauna crossing,” reads a sign among the cactus and wild bushes in the northeastern desert, where deer, wild cats, coyotes and wolves crisscross the frontier. The habitat spans the Cabeza Prieta National Wildlife Refuge in Arizona and the Pinacate and Gran Altar Desert over in the Mexican state of Sonora. The latter is certified as a world heritage site by UNESCO.

The reserve is divided only by a simple fence with gaps big enough for the animals to pass through. “It was designed specially so as not to hurt the animals and so they would have no problem crossing,” said Miguel Angel Grageda, head of natural resources at El Pinacate.

Rain is scarce in the parched desert, where the heat soars as high as 55 degrees Celsius (131 Fahrenheit). The animals have to trot long distances to look for water, food and shelter. They must also be mobile to keep their numbers up when drought or sickness kill off the species in certain areas.

“If you just go and put a giant border wall between their habitat then you can cut movements off for some species which will prevent them from recolonizing their habitat,” said Aaron Flesch, an environmental specialist at the University of Arizona. “When animals have trouble moving across the landscape to recolonize those places, the population in those places will never be restored.”

Gerardo Ceballos of the Ecological Institute at Mexico’s National Autonomous University estimates there are only about five jaguars left on the U.S. side. They rely on partners from the Mexican side to mate. If the animal populations were split in two and each group left to reproduce only with the limited number of mates on its side, the species would degenerate.

“If we divide the population of the species in two, there will start to be crosses between related animals,” said Grageda. “Later on we could have problems of inbreeding.”

It is not clear when the United States will start putting up Trump’s wall or how exactly its course might be plotted through protected zones such as this one. But conservationists are imagining the worst.

“We don’t know exactly what the results are going to be,” said Flesch. “But we know they won’t to be good.”

Ceballos said various Mexican and U.S. non-governmental groups are preparing a challenge to the wall plan. “Over here it would require a political decision at the level of Congress” to block it, said Grageda. “We may not be able to convince Donald Trump.”

It is not just the animals who would suffer from a wall, experts say, but the whole desert ecosystem. Desert mammals break up the sun-baked ground with their hoofs so that when it does rain, the water drains underground. By tearing up the vegetation to eat it, they help spread the seeds so that desert flowers bloom anew.

A wall could have “a big impact” by blocking and shifting watercourses, Ceballos said. That, and the untold impact on the soil and atmosphere, could affect humans too. “When you put up a wall, you destroy everything,” he warned.