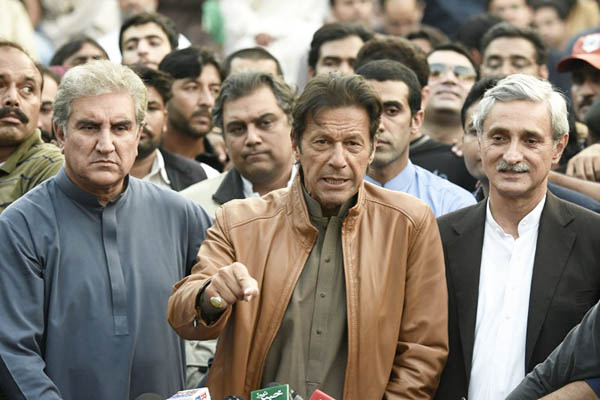 Imran Khan’s view of a potential travel ban on Pakistanis is horribly misguided.

After U.S. President Donald Trump banned the residents of seven primarily Muslim nations from entering America, cricketer-turned-politician Imran Khan welcomed the move. Addressing a political rally, he hoped the ban were also applied on Pakistan, claiming it would compel the country into self-reliance like much-sanctioned Iran. Fortunately, Islamabad’s Foreign Office had a more measured response. Its spokesman Nafees Zakaria said: “Every country has the right to form its own immigration policy.”

The world is protesting against Trump’s go-it-alone worldview. In the U.S., economists have not yet digested his challenge to the only trade paradigm they know. Going it alone is not what states would like to opt for—unless they are wedded to honor, which requires the condition of being alone. Less developed societies think honor is worth dying for. Their men constantly feel honor-challenged and make emotional decisions. They don’t like economists who recommend flexibility—read cowardice—in the face of sanctions. Honor is felt by the state as sovereignty. But if the state is internally weak, it can hardly defend its external sovereignty. In consequence, it feels dishonored.

Khan’s answer to President Trump appeals to a segment of Pakistanis but reality impinges when we see Islamabad’s trade overwhelmingly dependent on the U.S. and Europe. Similarly, a large community of expat Pakistanis lives in the U.S., many of them born there. Above all, any self-reliance will lean heavily on Pakistani scientists educated in America, as China’s example shows. And if we respond with a reciprocal ban on Americans—as also suggested by Khan—it would hardly matter to the Trumpists.

Any ban would hurt us badly without improving our economy. Khan’s belief in Iran’s isolation driving innovation is also flawed; the PTI’s leader must calculate the extent of suffering the Iranians have gone through under a totalitarian order—simply for the “luxury” of attacking an American embassy and keeping it besieged for over a year.