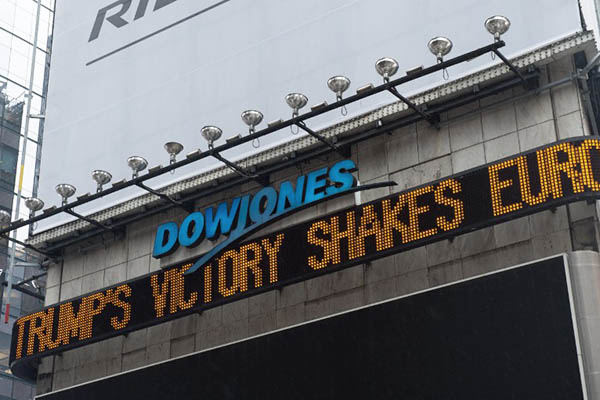 Economists say president-elect’s trade protectionism could spiral into ‘trade wars’ that have no winners.

Donald Trump won the White House race arguing that the U.S. economy is in dismal shape—despite it growing better than other advanced economies. Now economists worry about how his views will impact growth going ahead, from the trade protectionism he espouses to criticism of Federal Reserve monetary policy.

Despite four years of solid economic growth, with unemployment falling to 4.9 percent, Trump’s opponent Democrat Hillary Clinton could not capitalize on the stronger economy left by President Barack Obama.

Trump gained more traction with his message to those who may not have felt the impact of the growing economy in their daily lives. He said he would fight back against unfair trade, restore U.S. manufacturing jobs, and create jobs through spending on infrastructure. “We’re going to rebuild our infrastructure, which will become, by the way, second to none. And we will put millions of our people to work as we rebuild it,” Trump said in his victory speech early Wednesday. “We have a great economic plan. We will double our growth and have the strongest economy anywhere in the world. At the same time, we will get along with all other nations willing to get along with us.”

In a statement congratulating Trump, the Alliance for American Manufacturing, which represents manufacturers and steelworkers, said the election was about the economic pain felt by voters. “Communities across America felt left behind as manufacturing jobs disappeared, and no single election cycle can erase that,” it said. “Factory workers were more than a prop in this election. Now’s the time to deliver for them.”

Economists agree an infrastructure program could provide a boost to the economy and jobs if properly executed over time, and some sectors stand to benefit as well from the tax cuts and deregulation Trump has promised. But they also warn that other Trump policies could reverse economic gains, especially his threats to impose import tariffs on key U.S. trading partners, like Mexico and China, which he has said will protect jobs.

Pantheon Macroeconomics economist Ian Shepherdson cautioned that “trade wars can spiral quickly, and when that happens, no one wins. Jobs are lost and prices rise, hitting the poorest, least-educated people hardest. Trump voters, in other words.”

Nobel-prize winning economist Paul Krugman said Trump’s inexperience on economic policy and unpredictability risks further damaging the weak global economy. “What makes it especially bad right now, however, is the fundamentally fragile state much of the world is still in, eight years after the great financial crisis,” he said in a blog post. “So we are very probably looking at a global recession, with no end in sight.”

Economists also worry that a surge in infrastructure spending, coupled with Trump’s promised tax cuts, will balloon the government deficit and force up the debt. Trump’s criticism of the Fed also spread worry. During the campaign he criticized Fed Chair Janet Yellen for keeping interest rates too low for too long, to help Obama and Clinton.

Analysts fear that criticism could lead to Trump and the Republican Congress pushing through legislation that would undermine the independence of the central bank. Some think Yellen may resign but likely will not be reappointed.

“Trump may criticize the Fed and Chair Janet Yellen, but Yellen is expected to remain as Chair through the end of her term in February 2018,” Berenberg Capital Markets economist Mickey Levy said in a research note.

Simon Johnson, former International Monetary Fund chief economist, summed up his fears about Trump policies with a comparison to Argentina. “The classic populism of Latin America is exactly, you do a lot of giveaways, do a lot of infrastructure spending, you finance that by issuing debt, you run the economy too hot, you keep monetary policy too loose—in part because the central bank is under political control. So which part of this does not fit our current situation?”