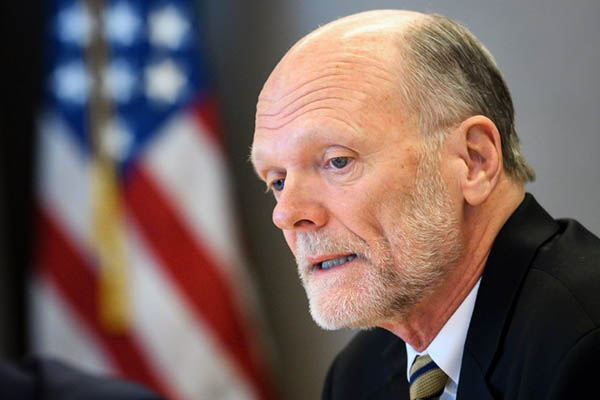 Donald Trump’s nominee to lead the U.N. migration agency said on Monday that he has convinced member states that he holds no anti-Muslim views, after a series of reports accused him of prejudice against Islam.

Ken Isaacs, who has a long record of humanitarian work with the Christian charity Samaritan’s Purse and within George W. Bush’s presidential administration, has been nominated by Washington to head the International Organization for Migration (IOM).

Isaacs is in Geneva trying to rally support for his candidacy ahead of a June vote in which IOM’s 169-member states will choose their next director-general, a post traditionally held by an American. But his candidacy has been complicated by reports detailing incidents where Isaacs apparently tweeted or retweeted material offensive to Muslims.

Speaking to journalists on Monday, Isaacs said he has met with envoys from dozens of IOM member-states, including majority Muslim nations, and convinced them he was not a bigot. “Yes, they feel satisfied,” he said, adding that “after talking to me for a minute or two and hearing who I am, what I talk about, what my heart is,” questions about prejudice vanish, he said. “I have never shown discrimination against anybody for anything, period,” he said. “If [people] need help, I have always helped them.”

Questions about Isaacs’ views on Islam emerged shortly after his Feb. 1 nomination. The Washington Post has reported tweets between 2015 and 2017 in which Isaacs claimed the Quran “instructs” Muslims to commit acts of violence and disputed whether Islam was a peaceful religion.

Last week, CNN reported on a set of retweets, including one in December in which Isaacs circulated a post from Robert Spencer, the director of Jihad Watch, which argued “peaceful Muslims” and “Jihadis” were indistinguishable.

CNN reported four other instances where Isaacs retweeted anti-Islam sentiments. Isaacs’ Twitter account has since been made private.

He defended himself against the Post’s charges in an email exchange with AFP last month and on Monday responded to the CNN report. “First, I would point out the bio at the top that says retweets are not endorsements… I have retweeted many things to stimulate conversation,” he said.

He added that accusing him of discriminating against Muslims stands in defiance of his four-decade career, highlighting his relief work in Darfur, Jordan, Iraq, Bangladesh and elsewhere helping Muslims in need.

Isaacs currently faces two rival nominees from Costa Rica and Portugal in the race to succeed veteran U.S. diplomat William Lacy Swing as director-general of the IOM. He insisted he was “probably the best qualified” candidate and the only one “with any muddy boot experience” on the ground.

Isaacs has also come under fire for social media posts criticizing the landmark Paris climate deal, which Trump has decided to withdraw from.

In the interview with AFP last month, Isaacs refused to confirm that he recognized the existence of man-made climate change.

On Monday, he said he did not “deny that the climate is changing,” but declined to discuss the “motivations” behind those changes. “I am not a climatologist, I am not going to jump into that discussion at all,” he said.

IOM has identified managing the consequences of man-made climate change as a key priority. “I have read and am familiar with the strategic objectives of IOM in regards to climate change and I agree with those objectives. Those are action objectives and I have absolutely zero problem with implementing those,” he said.