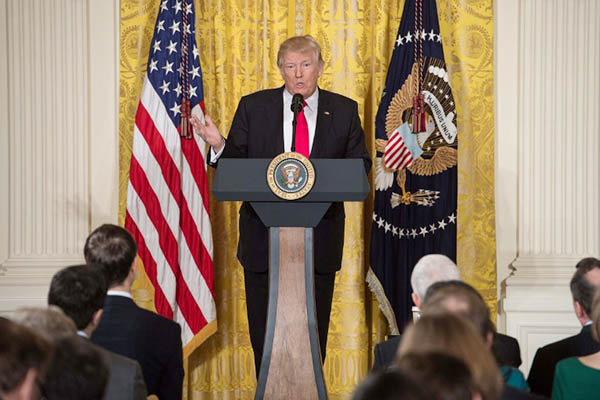 Report, dismissed as speculation by officials, claims U.S. president could visit the U.K. in October.

U.S. President Donald Trump has asked to delay his state visit to Britain later this year to allow public anger over the invitation to recede, it was reported on Wednesday.

The Sun tabloid said the trip, originally believed to be planned for June, was now being considered in October following protests and opposition from M.P.s.

Prime Minister Theresa May’s official spokesman said the report was “pure speculation.” Another government spokeswoman said: “There’s no possibility of it being pushed back, in that we never had a date announced.”

May extended the invitation for a state visit, a high honor that involves a banquet with Queen Elizabeth II, when she met Trump at the White House in late January. It was part of a charm offensive intended to strengthen bilateral ties as Britain prepares to leave the European Union. But coming at the same time as Trump announced his ban on refugees and travelers from seven mainly Muslim countries, it sparked public outrage in Britain.

More than 1.8 million signed a petition asking for the visit to be cancelled, prompting a debate in parliament where several lawmakers condemned the proposal. An unnamed government source told The Sun: “Trump still really wants to come this year but he wants the heat to die down a bit first. The White House doesn’t want to create a scene for our sake either.”

The paper reported that Trump could make his state visit from Oct. 5 to 8. This would fall within parliament’s recess, meaning that Trump would be unable to give a speech to lawmakers, as his predecessor Barack Obama did in 2011.

The Speaker of the House of Commons, John Bercow, has said he believed Trump should not be allowed the honor.