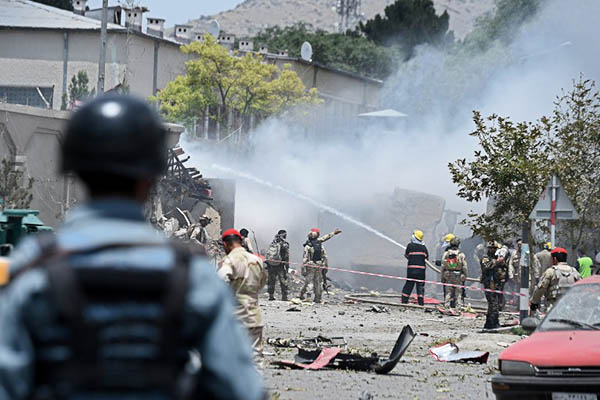 The NDS claims the June 25 attack on Parliament was orchestrated by an ISI official. Wakil Kohsar—AFP

Pakistan must support Ashraf Ghani and demand an inquiry into allegations of ISI collusion in an attack on the Afghan parliament.

At a press conference in Kabul on Wednesday, June 24, National Directorate of Security (NDS) spokesperson Haseeb Sediqi alleged that Monday’s attack on Afghanistan’s parliament was planned and conducted by the Haqqani Network in collusion with Pakistan’s Inter-Services Intelligence directorate.

Afghanistan’s Khaama Press quoted Sediqi as saying the attack was masterminded by Mawlawi Shireen, a Haqqani Network military commander, and financial and logistical support was provided by Bilal, an ISI officer. Sediqi also said that PKR 7.5 million were spent on the operation. The NDS, according to Sediqi, had information about a likely attack since June 10 and it had beefed up security in and around the parliament building. Two earlier attack plans, he said, had been foiled before they could get underway.

This is a very serious allegation, come as it does on the heels of a Memorandum of Understanding signed between the NDS and the ISI on May 17. It also appears, prima facie, that Wednesday’s allegation against the ISI is choreographed because of pressure from opponents and is meant to shrink space for President Ashraf Ghani, already losing political capital because of his sincere efforts to reach out to Pakistan.

But let’s rewind to the MoU.

The agreement seeks to bring the two intelligence services together in order for them to jointly fight terrorism. As reported in the Afghan press, “Based on the agreement, ISI will also train and equip the NDS… and both institutions will investigate accused individuals behind any terror incident within their respective countries. The MoU was signed by the first deputy of the NDS with Pakistan.”

Ajmal Abedi, spokesperson for President Ghani, was quoted as saying that “The memorandum of understanding between Afghanistan and Pakistan is not a new thing. In the past, both institutions had such agreements, but now the focus of this agreement is mostly on jointly fighting terrorism.”

The Afghan media, however, reported that previous [Karzai] government officials had rejected Abedi’s statement about any such cooperation or MoU in the past. The news about the signing of the MoU created much ruckus in Kabul. Not surprisingly, it also pulled in India with the Indian National Security Adviser Ajit Duval—a former police officer with long experience of covert operations against Pakistan—saying “What Pakistan wanted was to get an assurance and put pressure on Afghanistan, so that they will not allow their territory to be used for any security related work by India. That is the crux of it. This is based on a faulty assumption that India probably uses Afghan soil or Afghan nationals for its security purposes.”

Within Afghanistan there has been a public outcry against the move from legislators, former officials, the media and members of civil society. Even the office of Chief Executive Abdullah Abdullah “called for amendments to be made to the MoU”. As one report in the Afghan press put it: “His deputy Mohammad Khan said in the week that the CEO had been aware of the agreement in general but that additional clauses had been added without his knowledge. ‘According to my information, His Excellency Abdullah was consulted only on the draft agreement, but he remained completely unaware of some articles which were included in the agreement later’.”

Such was the opposition to the agreement that within about 10 days of its signing the NDS came out with the statement that it was “not practical” and would require for any validation a five-step process. The Afghan Wolesi Jirga, lower house of parliament, also threatened to invalidate the agreement if its [Jirga’s] conditions were not met.

The deep irony of this opposition was the refrain that Afghans don’t trust the ISI. Yet, a positive step to restore trust has been opposed with great vehemence on the basis of the argument that Afghans do not trust Pakistan. This has been a major setback to multiple steps taken by President Ghani to put Kabul-Islamabad relations on a different frequency, an approach Pakistan adopted during the previous regime. Former foreign minister Hina Rabbani Khar is on record as having said that Kabul was [is] the most important capital for Pakistan.

That policy has continued and got impetus with the arrival on Afghanistan’s political scene of Ghani. The Afghanistan president arrived in Pakistan with a three-phase plan: short-, to medium- to long-term, spanning a period from six months to 10 years. And he took concrete steps, in the teeth of opposition from various quarters, including from former president Hamid Karzai and his supporters. The NDS has been a particular problem, according to both Afghan and Pakistani sources, having worked closely with India’s Research and Analysis Wing.

India began its push back from the time Ghani withdrew the military equipment wishlist Karzai had placed before New Delhi. “It’s easy,” said an Afghan official to me, “because Pakistan is deeply unpopular in Afghanistan.” Ghani has attempted high-level interaction with Pakistan to build trust as part of a strategic dialogue with Islamabad. Kabul’s decision to send Afghan cadets to Pakistan Military Academy has been deeply resented by New Delhi and also elements within Kabul.

“President Ghani’s attempt to reach out to Pakistan is opposed by most in Kabul and carries grave political risk for him,” said the high-level Afghan source, who cannot be named.

Not too long ago, the Afghan National Security Forces launched an operation in the Dangam district of Kunar province at the request of Pakistan Army to neutralize elements of the Pakistani Taliban hiding there. The ANSF, according to Afghan sources, suffered about 150 casualties in that operation. Kabul also arrested and handed over to Pakistan two suspects involved in the Army Public School attack on Dec. 16, 2014. There has been at least one occasion, recently, when interrogators from the ISI were given access to suspects in Kabul.

“An important development relates to interconnectivity. The number of crossing points at Durand Line has been increased. Given the history and politics surrounding the Line, I’d say this is a very bold move by President Ghani,” the Afghan source told me.

But Afghans also say their expectations have not been met. Attacks have increased and become deadlier. A Pakistan Foreign Office source, when asked about Afghan concerns, told me, “Kabul’s expectations are unrealistic. We can facilitate and we are absolutely clear that we have to do it. But we don’t control elements that are attacking the government. And Kabul’s BSA with the U.S. hasn’t helped matters in terms of negotiations with the Taliban.”

That might just be true. The sentiment is also expressed by sources in the Army. There are no command lines and many Taliban commanders who have lived in Pakistan have become irrelevant to the fight on the ground. Observers know that while Taliban is a term generically used for everyone who is fighting, the movement is not monolithic. That makes dealing with the phenomenon even more difficult.

Another development relates to Tehran’s role. Iran has begun supporting some Taliban groups as the movement itself has seen schisms, with some groups in the east and southeast now fighting under the banner of the Islamic State.

Tehran would like to stem that development in the bud. But that is not the only objective. It also wants to extend and retain its influence within Afghanistan and its material—funding, weapons and training—support to Taliban groups is pegged on both these objectives.

Be that as it may, the opening that began with Ghani is fast closing. It is a no-brainer that Pakistan will reject the NDS allegation. But Islamabad needs to go beyond just doing that. It must ask for an inquiry into this allegation so that the real story can come out. It is important, in fact crucial, for Pakistan to fully support Ghani. If Ghani fails or falls, the two countries will be thrown back into a cycle of violence and it may be decades before someone like Ghani could reemerge. And even if one did, the atmosphere would have been vitiated to a point of no return.