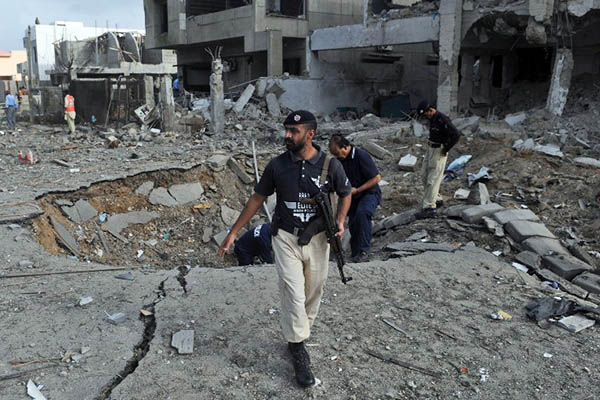 The Pakistani Taliban on Thursday claimed responsibility for the killing of senior superintendent of police (crime investigation department) Chaudhry Aslam in a suicide attack that left two others dead and 10 more injured.

“Chaudhry Aslam’s body was brought to hospital,” said Dr. Semi Jamili. “He received multiple injuries to his face and chest and we found pieces of metal and plastic on his body.”

The incident, which took place in the Essa Nagri area of Karachi, was the latest of a series of attacks targeting Aslam. In September 2011, his house was attacked in a similar suicide attack that left 10 people dead. After that attack, a defiant Aslam had told journalists: “I will give my life but I won’t bow to terrorists.”

Shortly after the attack, a spokesman for the Tehreek-e-Taliban Pakistan (Mohmand Agency) claimed responsibility and warned of future attacks. “We killed Chaudhry Aslam,” said Sajjad Mohmand from an undisclosed location. “Aslam was killing our friends through target killings, and was involved in criminal activities,” he claimed, adding: “This was a warning to the people who were on Aslam’s team. If they don’t distance themselves from his agenda, their fate will be even worse than him.” Earlier on Thursday, Aslam had claimed the killing of three suspected members of the Pakistani Taliban in an encounter in Karachi as part of an ongoing operation designed to clear the city of militants and hardcore criminals.

TTP central spokesman Shahidullah Shahid also claimed responsibility for the attack, validating the Mohmand chapter’s claims. “Chaudhry was on our hit-list,” Shahid told Newsweek. “He was directly involved in killing more than 50 mujahideen and anyone who dares to launch an operation against the mujahideen will be our target,” he added. Shahid vowed that the TTP would continue targeting security forces and termed the attack on Aslam a “big achievement.”

Prime Minister Nawaz Sharif strongly condemned the attack, saying: “His death is a huge loss to the police force.” Pakistan Peoples Party patron-in-chief Bilawal Bhutto Zardari, whose party is in power in Sindh province, also expressed his outrage. In a positing on Twitter, he said: “TTP dogs martyred my SSP. Shaheed Chaudhry Aslam had been threatened and & attacked B4. He didn’t back down. He died a brave man. Shame on cowards.”

Public cannot be Left at Mercy of Troublemakers:...

Second Bombing in Karachi in Less than a...