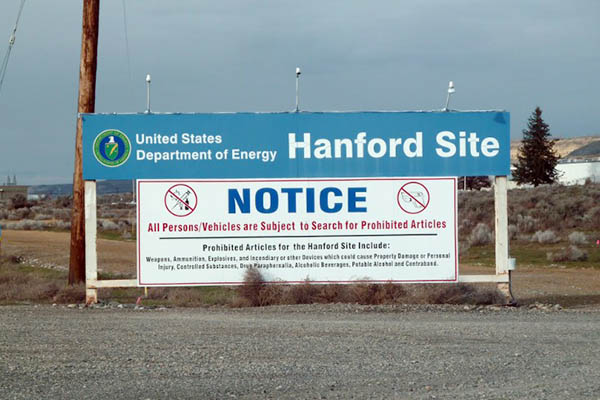 The collapse of a tunnel at the most contaminated nuclear waste site in the United States has raised safety concerns at such facilities described by some as ticking time bombs.

Workers on Wednesday began plugging a hole in the collapsed tunnel at the Hanford Site in the western state of Washington, where an emergency was declared the previous day and thousands of workers were placed on lockdown for several hours. Federal officials said approximately 50 truckloads of soil will be used to seal the 20-foot hole in the tunnel where carts filled with contaminated equipment are stored.

The tunnel is one of two at the site containing radioactive waste from the time the facility produced plutonium for America’s nuclear arsenal, including the bomb dropped on Nagasaki which ended WWII. The cave-in, detected during a routine inspection, has focused attention on Hanford, dubbed “the most toxic place in America” and where a number of accidents have taken place in past years.

“There are numerous disasters waiting to happen there and one can lead to another,” warned Tom Carpenter of the advocacy group Hanford Challenge and an attorney who has represented whistleblowers at Hanford and other nuclear sites.

Carpenter said while no contamination was detected from the tunnel collapse, the incident highlights the challenges facing clean-up efforts at the massive facility, which spreads across 586 square miles.

The last reactor at Hanford shut down in 1987 and since then some 9,000 people have been working to clean up millions of gallons of leftover waste stored in 177 aging tanks. The remaining cleanup is expected to cost nearly $108 billion by the time it is completed in 2060. Carpenter said it was a miracle a major disaster had not taken place at the site located 170 miles southeast of Seattle, given the dilapidated state of the facility and repeated warnings by people who have worked there.

“There is so much junk and radioactive crap buried all over the place,” Carpenter said. “The facility is decrepit, the concrete is decaying and there are studies and engineers who work there who say ‘I don’t think it will last another four years.’” He said most of the storage tanks—built in the 1940s and early 50s and designed to last 20 years—had leaked in past years and could cave in if there was an earthquake. He also noted that experts had identified the tunnels and the nearby Plutonium Uranium Extraction Plant (PUREX) as a major risk area in recent years but said the Department of Energy, which oversees the site, had been “complacent” about such warnings.

“I guess they tell themselves it hasn’t happened yet so it probably won’t, which is a silly way of doing business at a nuclear facility,” Carpenter said.

John Garrick, an expert on nuclear waste, agreed that Hanford was probably the most challenging nuclear waste site in the country. But he said that by and large the facilities there, like others nationwide, were holding up very well. “Managing the waste is definitely not out of control,” said Garrick, who served as chair of the U.S. Nuclear Waste Technical Review Board and was on the board until 2012. “This is not a disaster from a public standpoint,” he added, referring to the tunnel cave-in. “It’s a mess and it’s expensive and it’s just another indication of the continued problems associated with the legacy waste—the waste that was generated during the development and manufacturing of nuclear weapons.”

Destry Henderson, spokesman for the Hanford Site’s emergency operations center, told AFP that crews expected to finish on Wednesday plugging the hole at the tunnel near the PUREX, located at the center of the site. “They’ve laid some gravel down on which heavy equipment will operate today to begin placing the soil, slowly and methodically in the caved-in portion of that tunnel,” he said.

Henderson said most employees had been told to stay home Wednesday out of an abundance of caution. The nuclear site, which is twice the size of Singapore and sits next to the Columbia River, is one of the original Manhattan Project sites, which led to the production of the first atomic bombs.