Home Culture Tupac Shakur Lives On—20 Years After His Death

Tupac Shakur Lives On—20 Years After His Death 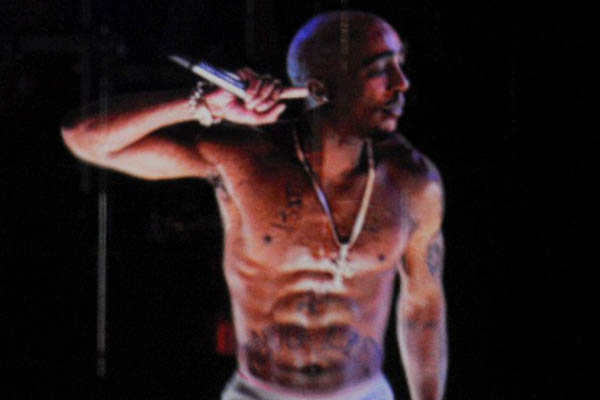 Hip-hop star remains a global icon from the U.S. to Libya as the ‘voice of the voiceless.’

Two of the most awaited hip-hop albums since last year came from Kendrick Lamar and Frank Ocean. On the final tracks, each album hit a familiar note—the rappers invoked Tupac Shakur.

When rapper Khaled M. visited his ancestral Libya after the fall of dictator Muammer el-Qaddafi, he was startled to see the likeness of Tupac—as well as another late music legend, Bob Marley—plastered on the walls, even in a country far removed from English-language pop culture.

Twenty years after his death, Tupac still reigns. Other rappers have succeeded him in stardom, and promotional efforts around Tupac have been haphazard, but the artist who died at age 25 on Sept. 13, 1996 maintains a hold that is among the most enduring in recent times.

“He represented, more than anything, just that angst for people who felt oppression and poverty or who felt marginalized,” said Khaled M., the U.S.-raised son of Libyan dissidents who has gone on to a rap career. “He was the voice of the voiceless,” he said. “Up until this day, I don’t think we have a hip-hop artist being able to replicate all of his voice, or his depth and passion.”

His emotional directness and range—from prophetically warning of his violent death to making maternal affection acceptable for a gangsta rapper—helped transcend borders.

Global artists who have cited Tupac’s influence include DAM, the pioneering political Palestinian hip-hop group, to rappers in Iran, sub-Saharan Africa and eastern Europe. His influence was not always a positive force; during Sierra Leone’s brutal civil war, guerrillas donned Tupac T-shirts as fatigues and took his aggressive “Hit ‘Em Up” as an anthem.

Tupac was shot on Sept. 7, 1996 in Las Vegas, dying of his injuries six days later. His murder officially remains unsolved and his fate has fascinated conspiracy-minded fans, with a photo going viral just last month of a man in South Africa who Internet users insisted was the long-lost rap messiah.

The Los Angeles Times in a lengthy but controversial investigation in 2002 tied Tupac’s killing to the Crips gang. His death came at the height of a vaunted rivalry, egged on by promoters, between East Coast and West Coast hip-hop, with leading New York rapper The Notorious B.I.G. slain six months later in Los Angeles.

Tupac was born in New York and raised in Baltimore but became one of the most identifiable figures in the West Coast scene centered around Suge Knight’s Death Row Records. He had repeated brushes with violence and went to prison in 1995 on sexual assault charges, with his Me Against the World becoming the first number one U.S. album by a serving inmate.

Yet Tupac’s identification as a gangsta rapper came late in life. The future icon entered the hip-hop world not as a tough guy but as a cheery back-up dancer for the sensual Digital Underground and, despite the assault allegations, was a rare rapper to condemn violence against women.

As his career boomed in 1990s he was a successful actor, starring across Janet Jackson in Poetic Justice and playing a conflicted gang member in Juice. He also gave long, introspective interviews, one of which was sampled at the end of Lamar’s acclaimed 2015 album To Pimp a Butterfly.

Tupac—whose mother Afeni was active in the Black Panther movement and named him after Tupac Amaru, the 18th-century indigenous revolutionary in Peru—also raised issues facing African-Americans from police brutality to mass incarceration. The message was not in itself groundbreaking—artists such as Public Enemy, N.W.A. and KRS-One brought politics into hip-hop from the 1980s. But Michael Jeffries, an associate professor of American Studies at Wellesley College, said Tupac possessed a dramatic flair and emotional energy like few other rappers in history.

“You don’t have to speak the language fluently to understand the narrative,” he said.

Tupac also emerged at a propitious moment, Jeffries said. Hip-hop had just gone mainstream and, with the music industry’s downturn still several years away, record labels were investing heavily in artists. “He is uniquely positioned to capitalize on it, not only because he’s a talented rapper but because he’s a gifted actor as well. He becomes a true crossover celebrity precisely at the time that money is flowing into the business,” he said.

Tupac was ‘resurrected’ in 2012 at Coachella, one of the world’s preeminent music festivals, where he performed in one of the first concert holograms alongside former associates Snoop Dogg and Dr. Dre. Yet despite his global persona, few formal tributes exist for Tupac, whose mother said she spread his ashes on her North Carolina farm.

His mother had sought to direct his legacy through a youth art school near Atlanta, funded through the seven albums from the prolific Tupac that were released posthumously. But the school—with its bronze statue of Tupac—has shuttered and Afeni died in May this year.

Travis Gosa, an assistant professor of Africana Studies at Cornell University, voiced concern for the future of the defiant rapper’s legacy in an era when tickets for the hip-hop musical Hamilton fetch hundreds of dollars.

“One thing that is ironic about Tupac 20 years after his death is that you can go to a Starbucks coffee shop and hear Tupac playing on the speakers,” he said. He said that Marley’s example showed the need for caution. Marley, whose music was driven by messages of uplift and pan-African resistance, since his death in 1981 has been relentlessly commoditized in T-shirts, posters and even marijuana brands with little connection to his causes.

His mother “did the best while she was alive to really use the branding cachet of Tupac’s name to do something that goes beyond just generating money. Now that she’s gone, I’m not sure what’s going to happen,” Gosa said. “People are able to rent out their own Tupac hologram now. I think we need to be vigilant about what the Tupac brand is going to be 10, 20 years from now.”