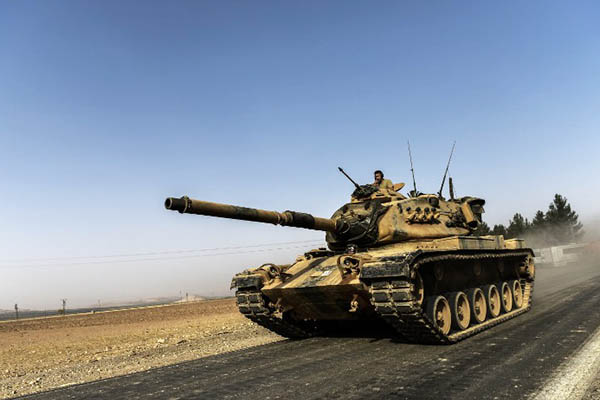 Ankara claims Kurdish militias will continue to be targeted until they retreat east of the Euphrates.

Turkey on Wednesday denied a U.S. claim it had agreed a truce with a Kurdish militia targeted as part of its week-old intervention in Syria but Turkish-backed fighters confirmed a lull in the fighting.

In an unprecedented operation, Turkey sent tanks into Syria to help Arab rebels clear the border area of Islamic State jihadists and halt the westward advance of a U.S.-backed Kurdish militia, which Ankara sees as a terrorist group. The assault on the Kurdish-led forces has sparked international concern and Washington had said on Tuesday that the two sides had agreed to a ceasefire.

But Ankara dismissed this claim, which was corroborated on the Kurdish side. Presidential spokesman Ibrahim Kalin said a truce was “out of the question.”

“They will remain our target unless they retreat east of the Euphrates,” he said, repeating Turkey’s demand that the Syrian Democratic Forces (SDF) a Western-backed anti-I.S. coalition dominated by the Kurdish Peoples’ Protection Unit (YPG), retreat to the northeast.

While Ankara maintained a defiant tone, one of the rebel factions fighting alongside Turkey said the combat had eased. “It has been calm since yesterday on the Jarabulus southern front against SDF forces,” Ahmed Othman, a commander of the “Sultan Murad” faction told AFP—an account corroborated by the Syrian Observatory for Human Rights.

Prime Minister Binali Yildirim said Wednesday that Turkey’s operation would continue “until terror elements are completely neutralized and threats to our border, soil and citizens are over.” But in the past 48 hours Turkish forces concentrated their firepower on I.S., whose strategist Abu Mohamed al-Adnani was killed in an airstrike claimed both by the U.S.-led anti-I.S. coalition and Russia.

Turkish media reported clashes Tuesday with I.S. west of the border town of Jarabulus taken from the jihadists last week on the first day of the intervention. Turkish warplanes conducted airstrikes against ‘terrorist’ targets in the area on Tuesday and Wednesday, the state-run Anadolu agency said, referring to I.S.

Meanwhile, with I.S. apparently on the back foot, Russia’s military said Wednesday one of its airstrikes had killed propaganda chief Adnani. A U.S. defense official, speaking on condition of anonymity, called the Russian claim “a joke.” The official told AFP the deadly strike was conducted by a U.S. drone.

Turkey sees the YPG as an offshoot of the rebel Kurdistan Workers’ Party (PKK), which is waging a bloody insurgency against security forces in Turkey’s southeast.

In the past few months, Turkey has watched in alarm as the PKK’s Syrian Kurdish allies advance on the other side of the border, fearing their territorial expansion will strengthen the PKK. The U.S. has, by contrast, been backing the YPG with training and equipment.

Washington described weekend clashes between Turkey and the pro-YPG forces as “unacceptable” and urged them to concentrate on combatting I.S. Turkish media reported that Ankara summoned the U.S. ambassador to protest the criticism.

A spokesman for the Turkish foreign ministry, however, told AFP that there was only a “phone call” to the ambassador, John Bass.

Turkey’s offensive has raised concerns that Ankara could be drawn even deeper into the Syrian conflict.

Iran, a key backer of Syrian President Bashar al-Assad’s regime, urged Turkey to quickly wrap up its campaign, calling it a violation of Syria’s sovereignty. Turkey has said Syria was informed in advance of the operation by Russia.

Meanwhile, the Turkish army, which lost a soldier last week to anti-tank fire, suffered further casualties. Three Turkish soldiers were injured in a rocket attack on a tank near Jarabulus, according to Turkish television.

Kalin said the Jarabulus operation had killed a “myth” that the Kurdish militia was the only effective force on the ground in the fight against I.S., adding: “The moderate Syrian opposition, if supported, could put up an effective fight.”