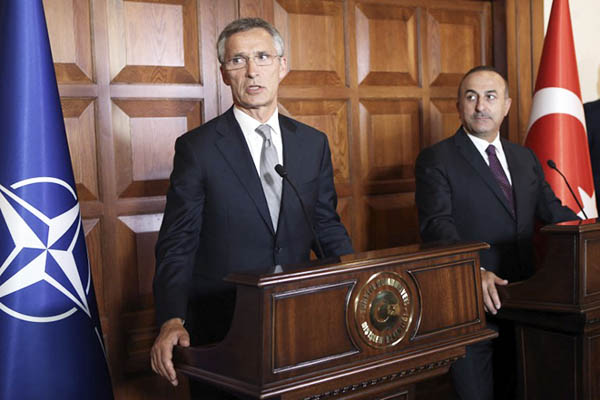 European bloc to push membership bid for Ankara after visit by senior officials.

Turkey and the European Union on Friday agreed to inject new momentum into Ankara’s faltering bid to join the bloc, pledging more cooperation and less acrimony following bitter rows in the wake of the country’s failed coup.

E.U. foreign policy chief Federica Mogherini and Enlargement Commissioner Johannes Hahn—making the highest-level E.U. visit to Turkey since the July 15 putsch attempt—said that new chapters in Ankara’s long-running accession process should be opened and that visa liberalization was still on the table.

Several Turkish and E.U. officials had engaged in a war of words after the coup, with Brussels slamming the ensuing crackdown and Ankara unhappy with an apparent lack of solidarity from the bloc.

“The key element which we agreed to was that we talk more to each other and a little bit less about each other, showing full respect,” Mogherini said after talks with Turkey’s Foreign Minister Mevlut Cavusoglu and E.U. Minister Omer Celik.

Mogherini unequivocally condemned the coup aimed at ousting President Recep Tayyip Erdogan, saying: “There is no space whatsoever… for any attempt at a coup.” She said the sides had an “in-depth discussion” about ensuring the rule of law was protected following criticism of the crackdown in which tens of thousands of people have been arrested or dismissed over alleged links to the putsch.

Cavusoglu added: “We must work together because there are problems that emerge that affect all our people. If there is a problem, we must mutually solve it.”

The comments signaled a desire to keep the momentum in Turkey’s E.U. bid, which sometimes looked to have severely stumbled in the wake of the coup.

Hahn acknowledged there had been “many irritations” on both sides following the coup, emphasizing that Turkey had to behave in a manner befitting of a candidate member. “Turkey was, is and will be a candidate country. And as a candidate country we have to apply higher standards.”

Turkey’s bid to join the E.U. dates back to the 1960s with formal talks starting in 2005 but the duration of the process has caused severe rancor in Ankara. After the attempted coup, Erdogan mulled bringing back capital punishment, a move that would spell an end to the bid. The issue of the death penalty was not raised at the press conference.

Hahn emphasized that visa liberalization for Turks traveling to the E.U.—which Ankara wants completed this year—was still on the agenda. He said chapters 23 and 24 of the accession process—covering justice and rights and freedom and security—should be opened as soon as possible and that a settlement to end the division of Cyprus would help this.

Celik said Ankara was ready to open all 35 chapters of the E.U. accession process. So far, only 16 chapters have been opened. “Turkey is a European country, a European democracy. Europe’s future is our future,” he said.

The unresolved situation in Cyprus, which is divided between the Greek-ruled, internationally recognized south and the Turkish north, remains a huge obstacle to Turkey’s membership bid, with the Republic of Cyprus blocking the opening of several new chapters.

Mogherini said there was a “window” of hope for Cyprus and expressed confidence there would be a solution “in the near future.” She said the issue of visa liberalization had been raised in “constructive” talks with Erdogan at the G20 in China.

A key problem in visa liberalization has been anti-terror laws in Turkey, which Brussels says need to be narrowed. But Celik said Turkey could make a “commitment” at the appropriate time overseen by the Council of Europe.

Later on Friday, Cavusoglu met with NATO Secretary General Jens Stoltenberg, who is also making his first visit to Turkey since the attempted putsch.

Turkey joined the Western military alliance in 1952 shortly after World War II, at the start of the Cold War. Its membership has traditionally been a cornerstone of Turkish foreign policy. “Turkey is and will remain a strong and highly valued member of NATO,” said Stoltenberg. “A democratic, strong and stable Turkey is important for our shared security.”