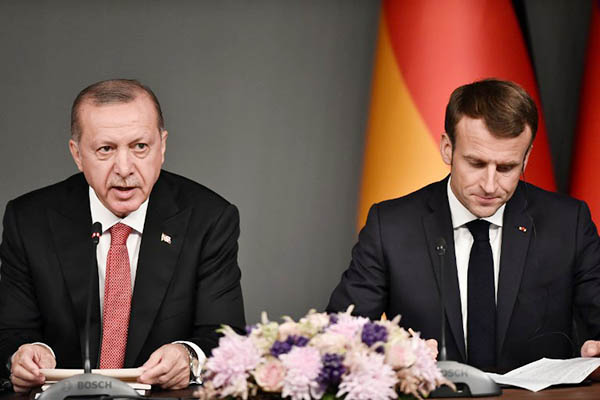 Turkey on Monday lashed out at “unacceptable” and “impertinent” comments by the French foreign minister who accused President Recep Tayyip Erdogan of playing a “political game” over the murder of Jamal Khashoggi.

Erdogan said on Saturday that Turkey had shared recordings linked to the Saudi journalist’s murder last month with Riyadh, the United States, France, Britain and other allies, without giving details of the tapes’ specific content.

In an interview with France 2 television on Monday, French Foreign Minister Jean-Yves Le Drian said he “for the moment was not aware” of any information transmitted by Ankara. Asked if the Turkish president was lying, he said: “It means that he has a political game to play in these circumstances.”

His comments provoked fury in Ankara.

“We find it unacceptable that he accused President Erdogan of ‘playing political games’,” said the communications director at the Turkish presidency, Fahrettin Altun, in a written statement. “Let us not forget that this case would have been already covered up had it not been for Turkey’s determined efforts.”

“It does not fit the seriousness of a foreign minister,” he said, accusing Le Drian of “exceeding his authority.” The French foreign ministry later spoke of a “misunderstanding,” adding that information provided by Turkey had not allowed for the “full truth” to come out, including who might be responsible for the crime.

“The full truth which we care about isn’t just linked to Turkish recordings (…) the full truth is also to be sought in Riyadh and in exchanges with our other partners,” the ministry said.

Khashoggi, a Washington Post contributor and critic of the Saudi government, was last seen entering the consulate on Oct. 2 to obtain documents for his forthcoming marriage to a Turkish woman. Turkey’s chief prosecutor has said he was strangled and then dismembered as part of a premeditated plan. There have been claims that his body was dissolved in acid.

After repeated denials, Riyadh finally admitted the 59-year-old had been murdered at the mission in what it called a “rogue” operation.

Erdogan has accused the “highest levels” of the Saudi government of ordering the hit, without directly pointing the finger at all-powerful Crown Prince Mohammed bin Salman. He has said he does “not believe for a second” that the prince’s father King Salman ordered the crime.

Secretary of State Mike Pompeo told the crown prince in a phone call Sunday that the United States would hold accountable all those involved in the killing.

Khashoggi’s murder and the war in Yemen are two of the main sources of strain in the decades-old alliance between Washington and Riyadh. The Yemen conflict has pushed that country to the brink of famine.

Altun said Ankara had shared evidence linked to the murder with officials from a large number of countries and that France was “no exception.”

“I confirm that evidence pertaining to the Khashoggi murder has also been shared with the relevant agencies of the French government,” he said.

A representative of French intelligence listened to the audio recording and examined detailed information including a transcript on Oct. 24, he added.

“If there is miscommunication between the French government’s various agencies, it is up to the French authorities—not Turkey—to take care of that problem,” Altun said.

Canadian Prime Minister Justin Trudeau said Monday of the recordings: “Canada has been fully briefed up on what Turkey had to share.” He added that he had brief exchanges with Erdogan over the weekend in Paris at commemorations marking the 100th anniversary of the end of World War I. “I thanked him for his strength in responding to the Khashoggi situation.”

Asked if he had heard the recording himself, he said: “I have not.”

Trudeau was speaking from Paris, where he was attending a peace forum hosted by French President Emmanuel Macron.

Canada’s spy chief David Vigneault traveled to Turkey at Trudeau’s request to discuss the investigation into Khashoggi’s death, the Canadian Security Intelligence Service (CSIS) confirmed. “As you can appreciate, I cannot go into specifics about the investigation but I can confirm that the director of CSIS has listened to the audio tapes in question,” said the agency said in an email.

German Chancellor Angela Merkel’s spokesman Steffen Seibert told reporters: “I can tell you that there was an exchange between secret services on this point,” but declined to elaborate.

Meanwhile, British Foreign Secretary Jeremy Hunt held talks Monday with Saudi King Salman and was also expected to meet the crown prince in Riyadh. “It is clearly unacceptable that the full circumstances behind his murder still remain unclear,” Hunt said ahead of his visit. He encouraged Saudi authorities to “co-operate fully with the Turkish investigation into his death.”