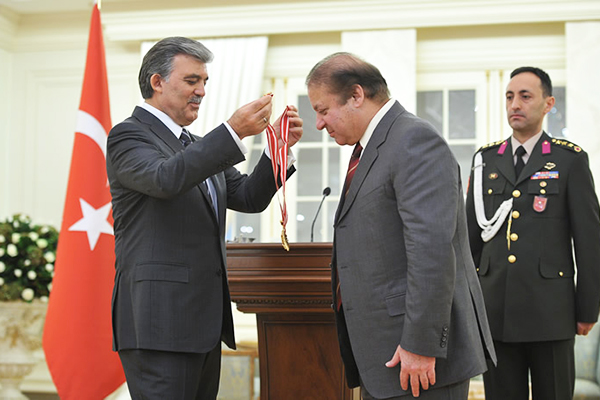 Courtesy of the Presidency of the Republic of Turkey

The Order of the Republic Medal is one of Turkey’s highest honors.

President Abdullah Gül awarded the Order of the Republic Medal of Turkey to Pakistan’s Prime Minister Nawaz Sharif on Tuesday.

“My dear friend, you have made tireless efforts to give momentum to development, so that democracy can pervade in your country, throughout your political career,” said Gül. “You, even during the times when democracy was suspended, acted with common sense, patience, altruism, and patriotic feelings lest your country be impaired. You have always given confidence and instilled hope in the people of Pakistan and in us, your friends, through these very merits you have. You have blazed a trail in the history of your country when you were elected prime minister for the third time. This, with no doubt, demonstrates [that] both your quintessential leadership and statesmanship are appreciated by the Pakistani people, and proves the trust the people of Pakistan put in Your Excellency.”

“This elegant ceremony is not only a symbolic one,” said Sharif, “It also marks the special and idiosyncratic relationship which stretches from the Himalayas to the uplands of Anatolia and which is cherished in the hearts of our peoples.” He added: “As a recipient of Turkey’s highest state decoration, I am deeply touched by the exalted recognition granted for my humble contribution to furthering our fraternal relations, a calling close to my heart.”

Sharif arrived in Ankara on Sept. 16 on a three-day visit. This is his third official visit since being sworn in as prime minister in June. He has previously visited China and Saudi Arabia and is scheduled to speak at the U.N. General Assembly in New York later this month.