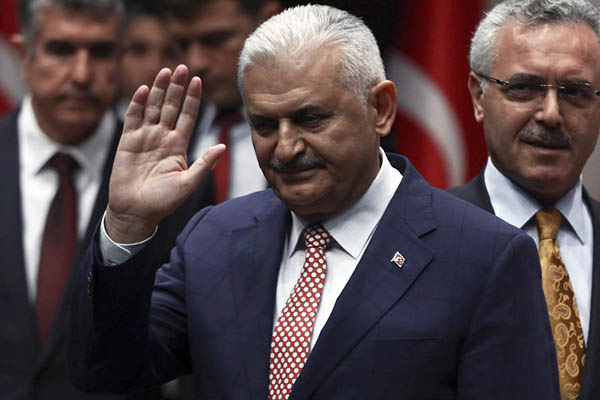 Turkey’s ruling party named a loyal ally of President Recep Tayyip Erdogan as the new prime minister Thursday, with the incoming premier immediately vowing to “work in total harmony” with the strongman leader.

The ruling Justice and Development Party (AKP) will officially appoint Transport Minister Binali Yildirim as its chairman Sunday, meaning he will automatically become prime minister. Yildirim will replace Ahmet Davutoglu, who stepped down after a struggle with Erdogan, as the president seeks to concentrate more power in the presidential office.

“We will work in total harmony with all our party comrades at all levels, beginning with our founding president and leader,” said Yildirim after being named party head, referring to Erdogan.

The 60-year-old Yildirim is seen as one of Erdogan’s closest longtime confidants and has served an almost unbroken stint from 2002 to 2013 as transport minister and then again from 2015. They are both strongly opposed to resuming talks with the outlawed Kurdistan Workers’ Party (PKK), the Kurdish militant group that has claimed responsibility for several attacks across Turkey since a two-year-long ceasefire collapsed in 2015.

The new prime minister’s main task, observers say, will be to pilot a change in the constitution to transform Turkey from a parliamentary to a presidential system, placing more power in Erdogan’s hands. “And now it’s time for the presidential system,” Yildirim said earlier in May just after Davutoglu’s resignation.

Erdogan’s critics have accused him of authoritarian behavior, pointing to the growing number of investigations pursued against journalists along with a bid to lift the parliamentary immunity of some deputies, a measure seen as targeting pro-Kurdish M.P.s and which will be put to a vote in parliament on Friday.

Another critical task facing the new prime minister will be to negotiate with the European Union on a crunch visa deal, a key plank of an accord aimed at easing the E.U.’s migrant crisis. The visa deal has been in jeopardy over Ankara’s reluctance to alter its counter-terror laws, a requirement of the agreement, prompting Erdogan to make a series of critical statements about the E.U. in recent weeks.

Yildirim vowed Thursday to “rid Turkey of the calamity of terrorism” during a symbolic visit to the mainly Kurdish city of Diyarbakir in the southeast. “We will do what it takes to achieve it,” he said, pledging to return to the city with Erdogan on May 28.

The new prime minister is a relative newcomer to foreign politics and his first high profile outing will be the opening of the inaugural World Humanitarian Summit in Istanbul Monday, attended by German Chancellor Angela Merkel. Analysts expect that Yildirim—who has never stepped out of line with the president on a policy issue—will prove a far more pliable figure for the president than Davutoglu.

After the announcement of a single candidate, Yildirim will likely be approved as new AKP leader by an extraordinary congress of the party on Sunday. According to AKP convention, the posts of party chief and head of government automatically go to the same figure.

Erdogan will then give the new AKP leader the mandate to serve as prime minister early next week, after which a new cabinet will be announced. As a ferry company chief and then as transport minister, Yildirim has for the last two decades worked in the transport sector, an area in Turkey that is trying to catch up its lag in infrastructure with vast new projects.

Yildirim and Erdogan have been close allies since Erdogan was elected mayor of Istanbul in 1994.

According to the columnist for the Hurriyet daily Abdulkadir Selvi, the only serious difference between the two men is that Erdogan supports the Fenerbahce football side and Yildirim their arch Istanbul rivals Galatasaray.

Despite Davutoglu’s shock announcement earlier this month that he was stepping down, the AKP has been keen to promote an image of unity in public. “There’s not one millimeter of difference between the AKP faithful and the president,” said party spokesman Omer Celik.

Davutoglu, who met Erdogan Thursday to discuss the transition, phoned his successor to congratulate him, according to the state-run Anatolia news agency. However, financial markets have not appreciated the political uncertainty, with the Turkish lira losing five percent in value against the U.S. dollar over the last month.