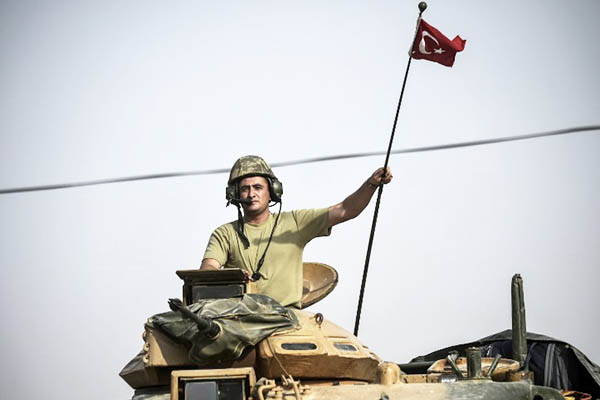 Turkey had been planning a Syria ground operation for over two years before launching an offensive this week, but it was stalled by the military and various international disputes, an official said on Thursday.

Turkish tanks and hundreds of opposition fighters thrust inside Syrian territory on Wednesday to retake the town of Jarabulus from Islamic State jihadists and keep Kurdish militia at bay. The operation is Ankara’s most significant move since the start of Syria’s bloody civil war more than five years ago.

Jarabulus has been under I.S. control for three years, with the timing raising questions over why Ankara had not launched the operation sooner. But the official, who did not wish to be named, said the government had “been working on a ground incursion for more than two years” but was ‘delayed’ by several factors.

The official said Washington had questions over the feasibility of Turkey’s plan to liberate Jarabulus, which was discussed with coalition allies in June last year. “Their basic argument was that the number of moderate rebels was simply not enough to perform the task of liberating Jarabulus and other parts of northern Syria.”

Ankara had in March given the White House a list of “moderate fighters”—1,800, but with the promise of 600 more—that would efficiently perform the operation, the source said. Elements in the Turkish army who had joined the July 15 failed coup against President Recep Tayyip Erdogan had also blocked the military intervention in Syria.

Some ‘influential’ senior personnel within the military linked to the coup held up the operation by coming up with ‘excuses,’ the official said, pointing to Brigadier General Semih Terzi, a prominent alleged plotter who was shot dead on the night of putsch.

And the crisis in relations with Russia sparked by Ankara’s shooting down one of Moscow’s warplanes in November 2015, had also been a factor. The risk of a further confrontation with Moscow put an end to all Turkish air operations over Syria that would have been essential for any ground operation. “It became practically impossible to implement our plans due to a lack of air cover,” said the official.

But in June, President Vladimir Putin accepted a letter from Erdogan expressing regret over the incident as an apology and after that “the ground incursion could practically go forward.”