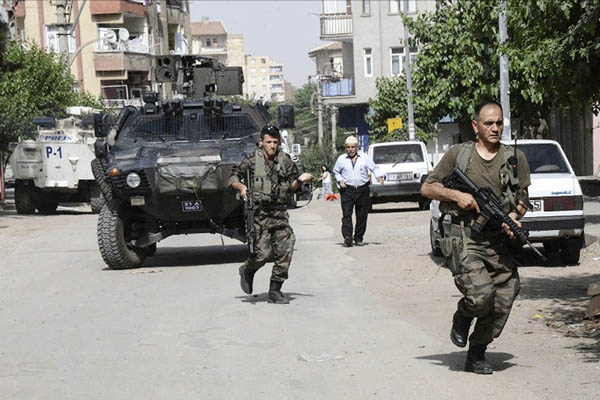 Foreign minister says ‘all options’ are on the table for operations against militants in coming days.

Turkey said Thursday that all options are being considered in the fight against the Islamic State group after the foreign minister said Ankara was planning more military action against the jihadists soon.

“We have plans to act militarily against them in the coming days,” Foreign Minister Feridun Sinirlioglu told a conference Wednesday in the northern Iraqi city of Arbil, describing I.S. as a “clear and present threat.”

“You will see. We should all stand together against this danger,” he said, according to the Anatolia news agency. Sinirlioglu did not specify what sort of operation Ankara was planning or where.

Foreign ministry spokesman Tanju Bilgic said Thursday that Sinirlioglu did not specifically use the expression “ground operation,” but added: “All options could be on the agenda.”

Ankara has since July launched a number of airstrikes against I.S. targets in Syria, although most of its firepower has been concentrated against Kurdish rebels in Iraq. Turkey blames I.S. jihadists for the twin bombings last month on a peace rally in Ankara, which killed 102 people and wounded 500—the deadliest attack in the country’s history.

Police have also rounded up dozens of I.S. suspects in recent weeks in raids across the country.

Obama and other world leaders will be in Turkey for a G20 summit on Nov. 15-16 where the war is certain to be high on the agenda. Turkey’s NATO allies had long chastised Ankara for not taking a tougher line against I.S. as the extremists seized chunks of northern Iraq and Syria right up to the Turkish border.

Following months of Western pressure, Turkey became a full member of the U.S.-led coalition against I.S. in August and now allows American jets to use its Incirlik airbase for raids, potentially making it a more likely target for jihadist attacks.

Sinirlioglu said the threat from I.S. militants was “far from over.”

“The occupation of one third of Iraq, and also vast areas of Syria, by Daesh has undoubtedly created one of the most serious challenges,” he said. “Daesh continues to constitute a clear and present threat, aimed directly at our way of life, our security, prosperity and stability.”